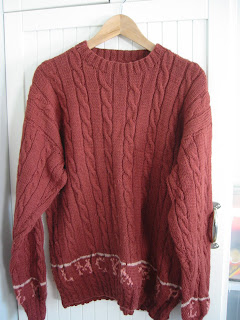 This sweater is one that has survived and been worn more than many. I knitted it in the late 1980s/early 1990s from a Rowan pattern and its knitted in the called-for yarn which I think was Handknit DK. It's a really soft wool and as you can see it has pilled a bit.
I think I like it so much because it came out exactly as shown in the picture, except mine is in nicer colours (!). The colour really suits me well and I still like to wear this on the rare occasions that the temperature in California warrants. I think I'm particularly pleased with how the colour substitution worked out - this sweater was just not a disappointment as so many are.

Here is a close-up of the detail. I still like the cabled rib that so nicely mirrors the cabling on the sweater. If I had planned it in advance I might have knitted my name into the sweater, but as it was, its just as specified in the pattern: random letters. 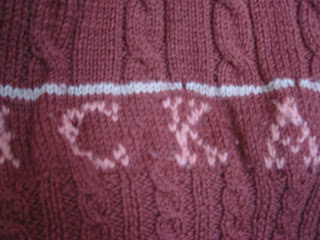 I bought the yarn for this on sale at Reis Wools in London, I went with Christina who worked in the shop as a student. I still have the bag although Reis Wools is not more.