Our vegatable box this week included a pumpkin (a sugar pie variety).
Finlay was inordinately excited about this and wanted to cook it himself.
He couldn't decide between pumpkin pie and pumpkin soup. A favourite book is Pumpkin Soup by Helen Cooper in which 3 animals co-operate to make soup. 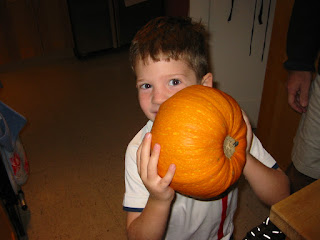 For lunch today we ate the completed pie, and it was delicious!

Finlay did all the mixing and measuring - a big advantage of cooking with American cup measures. We used this recipe from the farms which supply the vegetables. 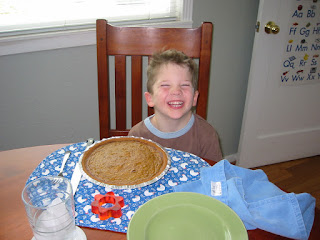 There was enough pumpkin left over so I made soup as well - which we ate before the pie....a very pumpkin-y meal!
Posted by Alison at 2:40 PM 2 comments:

This weekend Adam got the care of the class guinea pig; Magic. 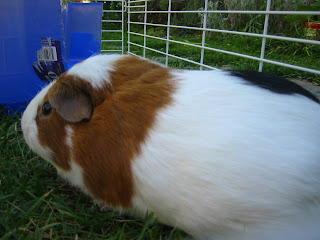 He is a lovely little creature and appears quite placid. The only excitement he has exhibited was when presented with lettuce.

Adam has actually taken good care of him, making sure he has food and water, and of course, exercise. 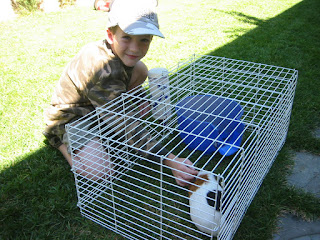 We were thinking of keeping him instead of mowing the lawn - but unfortunately I'm very allergic to him. Tomorrow we have the fun of cleaning the cage - not required of host families, but I thought it would be a good example for Adam of what is actually required when caring for a pet.

It never rains but it pours

This was the view from my front porch today: 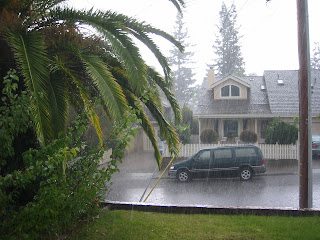 It seems fitting to welcome the first day of Fall (autumn for the Brits). I hope it clears up by tomorrow because the boys are invited to a pool party. The forecast is good - but I pity the poor hostess if the weather does not improve and 30 small boys arrive at her house.
The rain was pretty hard - the remnants of a weather system moving north from Southern Californina. Apparently it rains on 2 days in the average September, but last year we had a dry winter so it seems 'early' for rain. It's also been snowing in the Sierra... I don't know if that actually bodes well for Thanksgiving skiing or not, but we like to think so.
Posted by Alison at 6:07 PM 2 comments:

Messing about in Mountain View

We spent most of Saturday in and around Mountain View. It has a real downtown, although dominated by restaurants. The shops are somewhat different from Los Gatos: 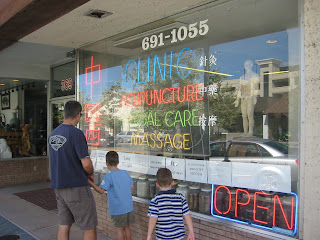 We had some lunch in a Thai noodle bar - Finlay wolfed down bowls of spicy noodles although they both gave up trying to eat soup with chopsticks. 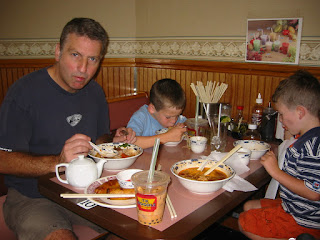 We then headed off to the Visitor Center at NASA Ames Research. We have been there before, but the exhibits were changed and now include a mock-up of a part of the SpaceLab in which Ames was involved. There was also a photo opportunity.

As usual Finlay was the most interested and has clarified his desire to be an astronaut: now he want to be a scientist who makes things that astronauts use. 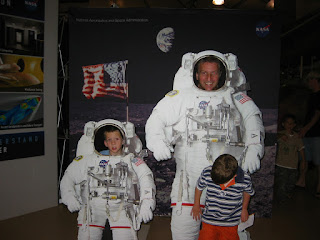 The staff at the visitor center recommended that we also visited the Museum at Moffat Field. This turned out to be fascinating. The giant hanger that we can see driving past was originally built to house dirigibles, or blimps, employed by the UA Navy for surveillance. At least one of these also acted as an aircraft carrier with small planes attached below. These were in their heyday in the 1930s-1940s.

The museum was staffed by volunteers, one of whom did a sterling job answering a million questions. He treated the boys by opening an aircraft cockpit that they are currently restoring, and letting them sit in the pilot and co-pilot seats and 'fly the plane'. 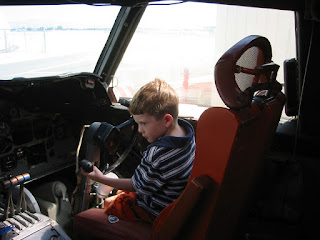 The boys left the museum full of enthusiasm about planes and flying: 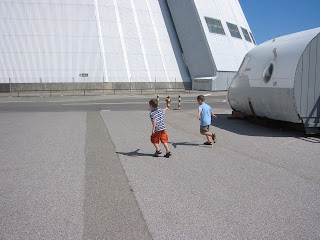 In the back here you can see one end of the giant hangar, and also the cockpit that we visited.

Posted by Alison at 2:15 PM No comments:

There has been a dearth of knitting at the Ferretworld blog recently. This does not mean that there is no actual knitting chez Ferretworld. I've been doing a lot of knitting, but am focussing completely on a large, but secret, project. When other bloggers say this they mean "I'm about to get a knitting pattern published" but you know that in my case it means "I'm knitting a gift for someone who reads the blog". Of course this is the problem with the start of the Christmas knitting season too....most of what I'm currently knitting is destined for someone else.
Posted by Alison at 9:22 AM 1 comment:

In addition to the short, but extremely informative workshop there was also a 'Trunk Show' of a large number of garments knitted from Habu yarns. I had previously seen and admired the yarn - but never thought of knitting from it. I mean, the idea of stainless steel wool is intrigueing, but what would you knit? 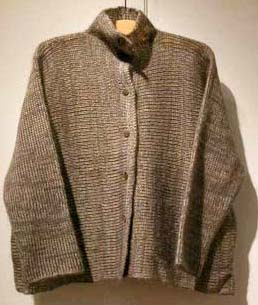 Seeing the garments and being able to try them on has completely opened my eyes to the appeal of these offbeat yarns: natural, with subtle but often intense colours. Now, I want to knit everything. This jacket is Kit 36 knitted from linen, mohair and silk. The one I really liked is Kit 65 which looked wonderful on...but from the photo seems rather uninspiring.


I was very restrained. I had not budgeted to buy a kit, and they are not cheap. However, I am planning a trip to New York in 2008, and guess where the Habu store is? Hmmm...now I just have to persuade my mother and sister that this would be an excellent place for us to visit.

* Turning Japanese was by the Vapours who were a 1-hit wonder band in 1979.

I had a commission to replace a pair of much-loved slippers that had worn out. I found a pattern, and started off with my dishcloth cotton. I finished the first slipper, and realized that it would easily fit me, rather than my 4-year old neice. So, it was back to the drawing board. I knit another pair, and these came out too small. Finally, like Goldilocks, these came out just right (I hope). 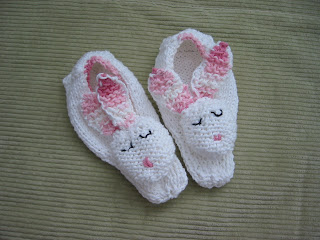 Mostly my own design - knitted in dishcloth cotton. I need to do something about the soles; the leather soles I bought are grey which I dont think looks so great with the white and pink slippers.

Today was Finlay's first day at his Jr Kindergarten. He was very excited at being one of the 'big boys' at his school. 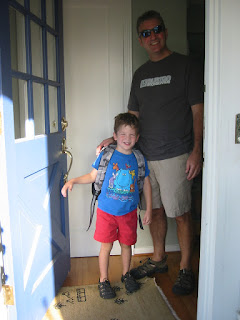 He got to choose dinner tonight - so of course we had pancakes again. This is him showing how many he ate: 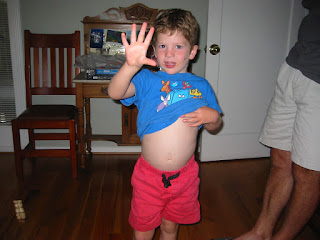 The night before I asked him if he was looking forward to Jr K and he explained that co-incidentally Tuesday would also be Fruit's first day at Jr Otter School.

This is Fruit (his stuffed otter from the Monterey Aquarium.) 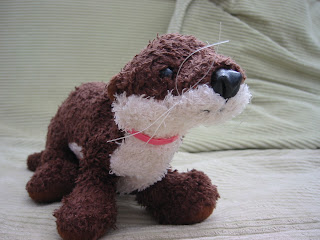 Finlay explained to me that up to now Fruit has mostly been doing drawing at his Pre-Otter school, but that he was really looking forward to Jr Otter school where he would learn how to catch fish and stuff like that.
Posted by Alison at 10:22 PM 1 comment:

Things are not always what you expect

We have had delivery of a load of beetroots in our vegetable box all of which were quickly eaten. Yesterday Finlay and I decided to use some of the reserved beetroot juice to see how it would dye wool.

We did some research on the internet and used a vinegar mordant. This was the colour of the wool in the beetroot juice: 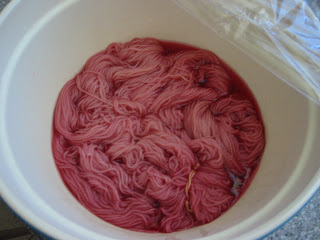 We had read that beetroot actually resulted in a muted colour, and this was our final result: 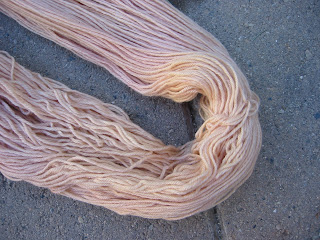 Its a rather nice pale pinkish fawn colour. However, since the boys wanted me to knit socks from this wool, I think we will overdye it with something else. It was fun to try a natural dye like this and a good experiment for Finlay and I.
Posted by Alison at 9:58 AM No comments:

The end of an era

This morning I finished reading "Blue at the Mizzen" the 20th book in Patrick O'Brien's Aubrey/Maturin series. This is the last complete book in the series (there is a partial unfinished work that has also been published) and I read it really slowly to spin it out. 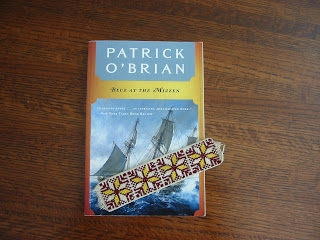 These books are rip-roaring accounts of Napoleonic seafaring and fighting, based on the life and activities of the fictional Jack Aubrey, the sea captain, and Steven Maturin the surgeon/spy.

For the last several years since I discovered this series they have been such a treat for me. I have not rushed through the series (as I sometimes do) but have saved them for vacations and business trips when I can really enjoy the narrative and the language of these stories. Mostly I have been getting the books out of the library, but have a few in the series that I particularly enjoyed.

The Patrick O'Brien books were the basis for the Russell Crowe film "Master and Commander" which is a combination of stories and characters from multiple books. I did enjoy the movie too, it was pretty close to the books and I liked the casting (although suspect Russell Crowe is maybe too good looking to be a true Jack Aubrey...in the books he is decribed as florid and overweight, but I liked to think that he might be handsome).

Sometimes reading fiction can open up a world of information, and these novels sent me reading other non-fiction works about Napoleonic sea life, and also to HMS Victory when we were last in the UK. It's great when the boys ask me questions about pirates, because I can answer a lot of the questions...

I'm told (Diane) that these are 'men's books' but I can recommend them to anyone of either sex who likes a good story, with a strong narrative, lots of excitement, and some interesting characters! I'm sorry that I have finished the series, but maybe now I can look forward to re-reading them.
Posted by Alison at 12:08 PM No comments:

Well, I obviously can't knit socks for Finlay without knitting some for Adam. Here are Adam's socks: 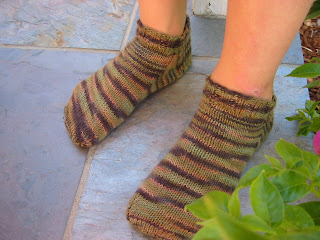 Lornas Laces in camo colour. Knitted with my usual pattern, but abbreviated as Adam only wants to wear short socks like this. These ones are ideal apparently for wearing with Heelys.
In other news we went again to Natural Bridges State Park. I didn't take the camera but it was a lovely day with the marine layer offshore. We took the surf board to try out, but it was high tide and when the waves break right on the beach you cannot surf. So, the boogie boards were in use again. It was a great escape from the 100-plus degree F (38 degrees celcius) heat here in the South Bay.
Posted by Alison at 10:01 AM No comments: