Finlay and I went to the beach today while Adam went to school. We headed for Capitola which is much improved since I was last there. 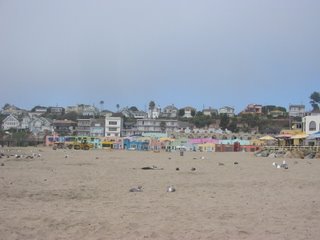 We arrived at 9:30 and it was much too cold to go on the beach, so we warmed up with hot chocolate and coffee.

By 10 the sun had come out and we hit the sand. 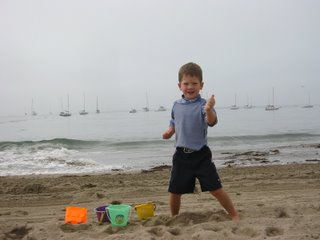 We had a lovely time and it did a lot to lift me out of my bad mood.
Posted by Alison at 5:31 PM No comments:

On Tuesday Adam went to school on the bus. The stop is at the top of our road and there are about 25 children who take the bus from this stop. Its a general get-together for all the parents. 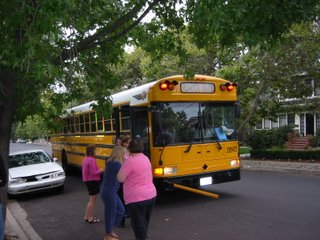 There are several other Kindergartners on the bus, but they didnt go on Tuesday so Adam asked Olivia if he could sit with her. She took good care of him getting him a seat at the front. 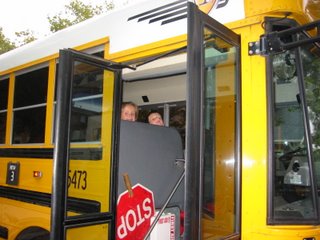 He says that the bus driver shouts a lot but she gives out stickers for good children!
Posted by Alison at 5:27 PM No comments:

Monday was Adams first day at school. He was very excited and a bit apprehensive. 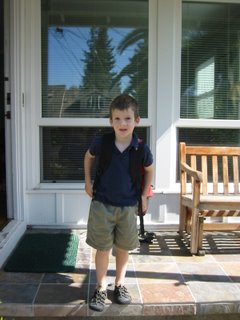 Finlay and I dropped him off at school - he was very disappointed that he didnt get to go on the bus, and even more disappointed when I picked him up too. 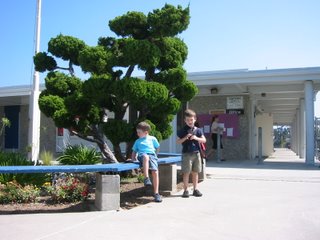 To celebrate his first day of school he got to chose his favourite meal for dinner, we ate pancakes.

I have heard other people talk about how emotional it was seeing their child off to school for the first time. I think that because he has been in daycare since he was 5 months, there is less emotion about leaving him with someone, or him going off alone. The only think that has really struck me is how quickly this has come around.
Posted by Alison at 6:51 AM 1 comment:

Yes, we have no bananas

We thought that we had a non-fruiting banana tree - but this week we have noticed these... 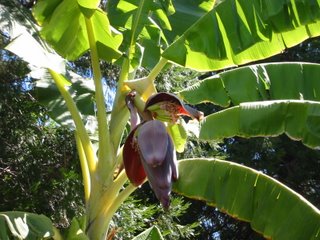 We dont still have the label from the tree - so are thinking that maybe the fruit is not edible - but we will probably try it anyway. 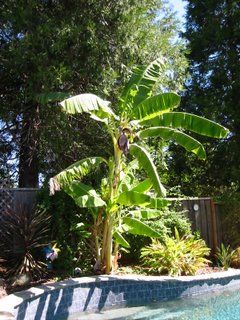 When we planted this it was less than 4 feet tall - the fence behind is about 5 feet high which gives some scale.
Posted by Alison at 11:32 AM 1 comment:

...the mice play. This is what we did this week.

The boys ordered some costume accessories from a catalog (after about 3 months deliberation). The stuff arrived on Tuesday. Adam, of course is a Knight. 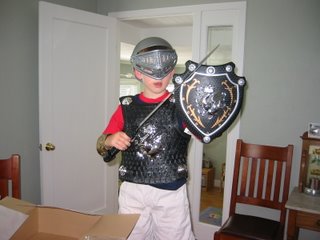 Finlay, equally naturally, is a pirate. Personally, I think he gives Johnny Depp a run for his ducats. 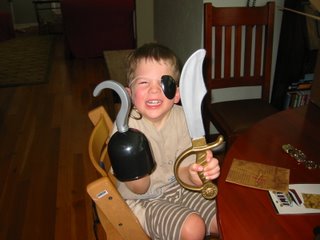 On Wednesday we had a tea party. A&F had been asking about drinking tea - so we decided to have a special party with cakes from Icing on the Cake. 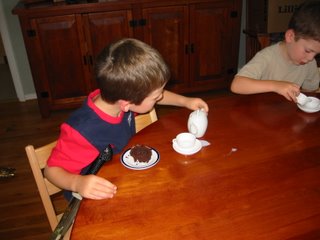 On Thursday we went to Bonfante Gardens. Adam took this picture of Finlay and I on the Ferris Wheel (!!!). 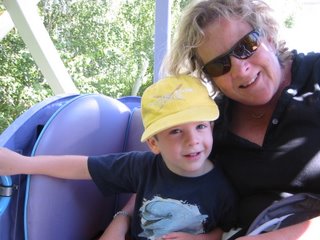 They also had fun in the waterfalls. Adam went around three times and got soaked, but since it was sunny we all dried out quickly. 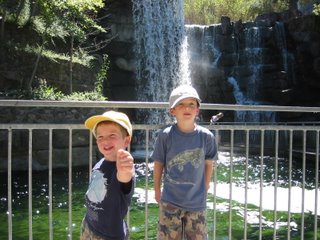 Finally, of course there was some knitting (and a lot of watching of Footballers Wives). Finlay has his own socks. 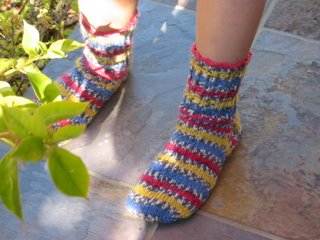 My usual basic sock pattern scaled as for Adams socks except I made the top of the ribbing red so they can tell their socks apart. I also made the entire cuff ribbed as his legs are skinnier than Adams although their feet appear to be about the same size.
Posted by Alison at 10:26 AM No comments:

At Adam's request I have knitted him socks. 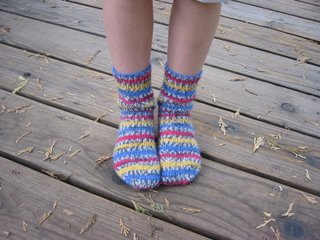 The wool is Elann Sock-it-to-me in Crayola colour. I used a generic plain sock scaled down. They fit him perfectly and he is (somewhat mystifyingly) really pleased.

The only problem with the socks is that Finlay has made an immediate request for some and is demanding them at once! He keeps asking me a) why Im not knitting, and b) are they finished yet. Watch this space...
Posted by Alison at 12:53 PM No comments:

Back from Lake Tahoe

We just returned from our vacation at Lake Tahoe. We stayed in a cabin in Tahoe City with a spectacular view of the lake: Alpenglow . The weather was fabulous and we got to do a lot of fun things: 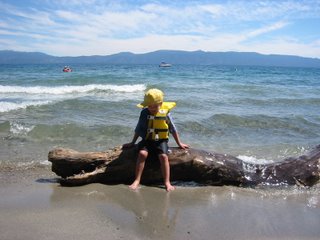 Beaches - here is Finlay on Sugar Pine point state beach on the west side of the lake close to where we stayed. Despite wearing the life jacket he refused to go in our tiny boat saying that he prefers bigger boats, preferably with a roof (!). 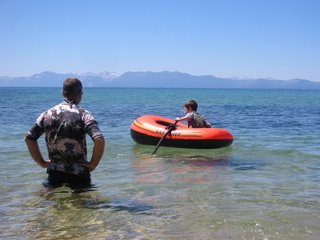 Adam spent hours in our inflatable boat at Sand Harbour State Beach. Sand Harbour is in Nevada on the east side of the lake. 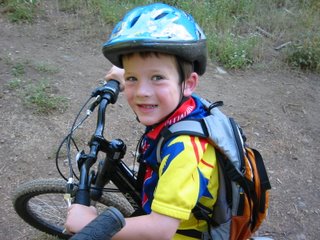 Adam got to go 'proper offroad mountain biking' with Nigel along the Pacific Rim Trail near our cabin. He was thrilled. 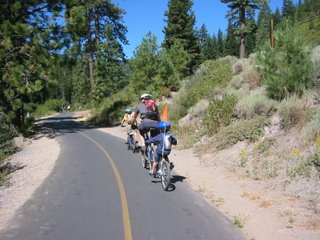 We all did several bike rides - here we are on the trail from Tahoe City along the Truckee river to Alpine Meadows. That day we did a 7 mile ride. 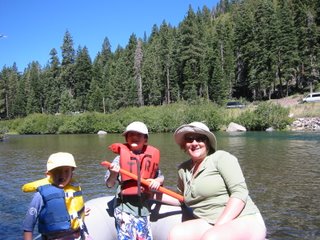 We also did a rafting trip along the Truckee river more or less next to the bike trail. We survived Class 1 rapids!

It was a lovely trip. We were all sorry to leave - but its also nice to be home again.

There was some knitting but that will have to wait for another post (sorry Duncan, I know how much you wanted to see the knitting content!).

Posted by Alison at 7:36 PM No comments:

What's on the needles?

Mostly I have been working on...

This misshapen bundle of orange and purple. 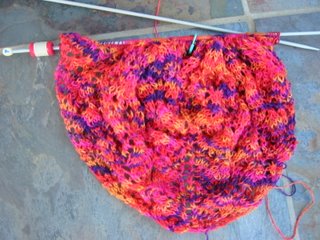 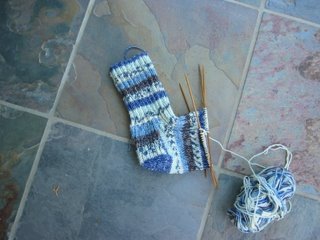 Today was Meredith's last day looking after the boys. We celebrated with ice cream at Dolce Spazio. 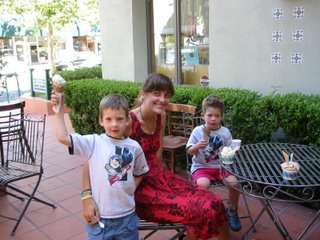 They have had a good summer with lots of fun and plenty of outings and I think they are really going to miss her. I am quite used to being called Meredith now ;-)

In 2 weeks Adam starts school in Kindergarten which hardly seems possible. Finlay also starts at a new pre-school.
Posted by Alison at 7:10 PM No comments:

The boys both got new wheels this weekend. Adam is now the (very) proud owner of a 'Real Mountain bike'. (I dont know why I bother with the quotes since it is actually a proper front-suspension bike and is fancier than my own bike). 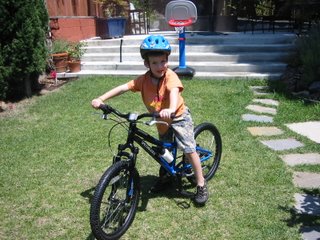 Finlay is the equally proud owner of a red razor scooter with 2 wheels - not 3 wheels like babies have - as he pointed out to Esme in the park as she rode her 3-wheeled Barbie scooter. 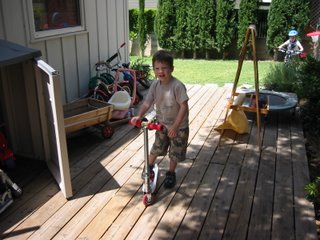 ps these photos were actually taken on different days - Adam is in exactly the same position 24 hours later!
Posted by Alison at 4:40 PM No comments:

Well, you never know...a few more years of Saturday ballet and Nancy might be headed off for the Royal Ballet School.

At least she will be wearing the right sort of cardigan...although I think the colour might be too lurid even for Nancy - this photo is rather more toned-down than the bubblegum original. 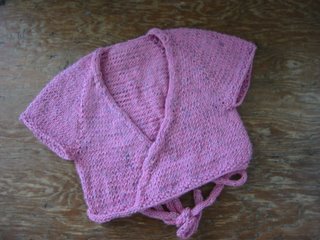 The pattern is of my own devising and I'm pretty pleased with it. Its a top-down raglan and I continued to increase on the neck edge until it was the size I wanted. The cords are i-cord and I did an applied i-cord edging. Its knitted in Tatamy Tweed 100% cotton.

I did get Finlay to try it on for size while I was knitting the cardi but he has flat refused to model the completed garment for a photograph.
Posted by Alison at 3:07 PM 1 comment: 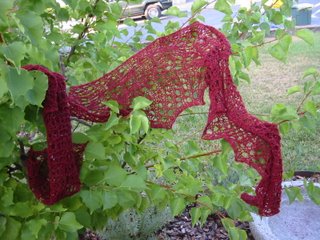 This is the cashmere feather and fan scarf. Its knitted in a modified feather and fan pattern in a large guage to make the most of the yarn yardage. The wool is a 100% cashmere from Colourworks (its an ebay store but of course I can't find the link now). Colour is 'oxide' and the photo is a pretty good representation.

The scarf is intended as a gift for Meredith - since she is not a knitted I hope she does not notice the mistake...I added a row in the center of the scarf which makes each side of the scarf a mirror image. I blocked it into points along each side because I dont have blocking wires. The blocking seems to have disguised the scarf's tendency to 'bend' at the point of the mistake...oops.
Posted by Alison at 9:02 AM No comments:

This was the view from my hotel window. Despite rolling blackouts in California the city was lit up all night. 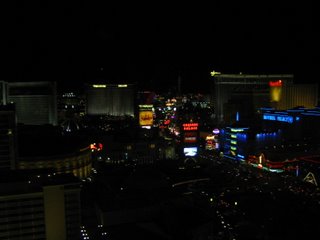 It was 106 degrees all day, every day, cooling to 90 degrees at night. The conference pretty well took up all my time, but I did make some time to enjoy the hotel. 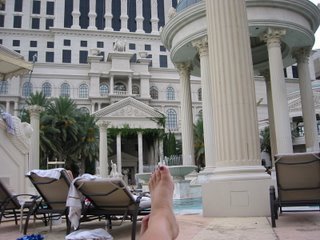 After my final presentation I retired to the pool with a margarita!
Posted by Alison at 11:42 AM 1 comment: