We went camping at Uvas Canyon this weekend. It's a small park with a very small campsite, there are only 20 or so sites, most of which are empty. The small size means that its an opportunity to let the boys play and explore with a minimum of supervision, which of course they love. 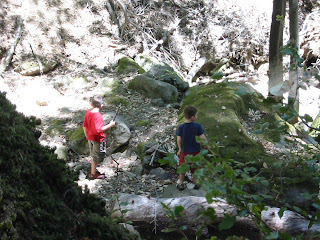 There are several trails, but the one we seem to do over and over is the waterfall loop which is short but steep. Its runs alongside the creek all the way with plenty of opportunity to mess about in the water looking for fish. Finlay took his magnifying glass, and Adam took his telescope to cover every eventuality of looking at things near and far. 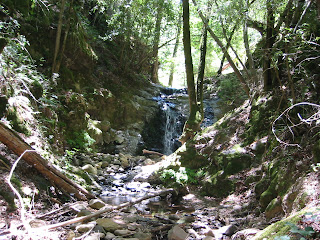 The waterfalls are pretty small, but I was surprised to see that there was any water in them given our dry winter this year. We saw lots of lizards, and a Garter_Snake which really excited the boys. We also saw this fellow who I think is a California Newt. He was about 8" long and froze obligingly while I took a photo. 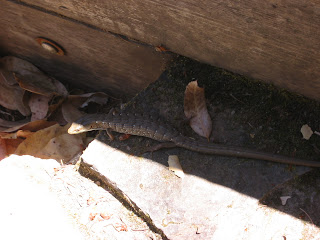 The boys took bikes and spent a lot of time racing around the campsite. Our friends came up for dinner with us bringing more wine, and turkish kebabs on swords (really - they bought them from a Turkish deli in Saratoga and had to leave a deposit for the swords). They children were all thrilled with the swords! Here are Alison and I testing the wine. 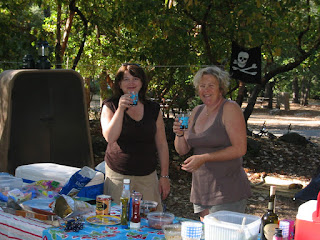 When we got home I asked Finlay what the best part of the trip was - he said "the eating"!
Posted by Alison at 1:07 PM