Be there or be square

When looking for a picture for our living room I went rummaging in the attic and found a poster that has been rolled up in a box. I picked it up at the opening of the Tate Liverpool in 1988. I just got it back from the framers: 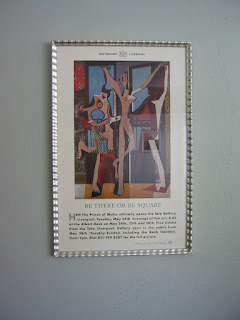 The Tate in Liverpool holds a particular affection for me: I was born in Liverpool, I was a student at the University from 1981-1984, and I did actually attend the gala opening event at the gallery (IBM had some sort of sponsorship deal for the opening celebrations).


The gallery is in the old Albert Docks which has another family association: my grandfather John Finlayson Sxxxxxx was a policeman in Liverpool, and rescued a man from the docks. I can only imagine that when these were working docks the condition of the water was considerably less appealing than it is now - and I would not voluntarily enter the water now.

It is really great to see some of the regeneration projects in this part of the city, once the docks closed, much of the waterfront was effectively abandoned. Now, there is quite a lot going on on the Mersey side. I have not been to Liverpool for more than 10 years, but I still read about events in the city from the University newsletter. One day I will take the boys there, but I wonder how much I will recognise?


This is a fun poster, but I like having it on my wall for all it's associations, as well as it's appearance.
Posted by Alison at 6:48 PM