Fin's teacher is currently on maternity leave and I wanted to knit something for her newest little boy. I like the coat-like quality of the Baby Surprise Jacket which makes it so suitable for our California climate. 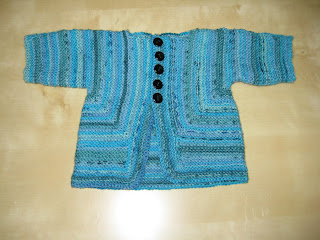 I bought the Drops Fabel sock yarn from Nordic Mart at Stitches 2011. The Baby Surprise is a good pattern for a self-striping yarn as it shows off the unusual construction of the garment. As I discussed last time I knitted this pattern, this is not apparently a baby jacket until the very last minute when you sew it up.

If you are not familiar with Drops yarn it's good quality, at great prices, and really excellent pattern support. This jacket used just over 100g of yarn, for which I paid about $4 - and it's lovely yarn. I bought some other Fabel sock yarn at Stitches which I am looking forward to knitting. I suspect my Dad is going to see some Fabel sock yarn up close before too long!
Posted by Alison at 7:19 PM 1 comment:

I'll have a slice

I accompanied Fin's class on a field trip on Monday. It's was Adam's favourite field trip ever when he was in 2nd grade - and looks like it's now Fin's favourite.

The visit was to Pizza My Heart, a locally owned business. The children got to visit the kitchen, investigate the large fridge, and watch the pizza chefs in action. I didn't get a photo but these guys were throwing pizza dough into the air and catching huge wheels of it for their super-size pizzas. 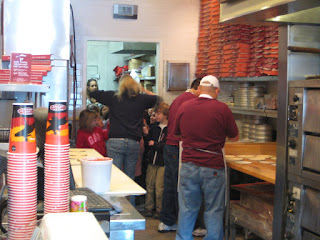 However, the children didn't just get to watch the pizza-making; they got to make their own. Fin chose a combination of cheese, pepperoni, pineapple, and olives and voted it the best pizza he had ever eaten. 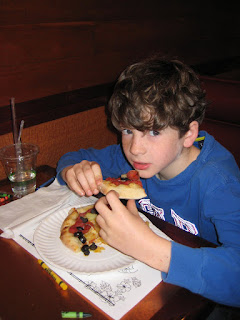 The teacher and parent chaperones also got to taste the pizza - and it was pretty good! The children each came away with a T-shirt which in their school becomes a sort of badge of honour: you have to be in 2nd grade to get one - so it's a big differentiator from the 1st graders!
Posted by Alison at 7:27 PM No comments:

Spinning and knitting and blocking

For Christmas 2009 the boys gave me 4oz of this lovely merino/silk fibre from Curious Creek. The colours were so lovely that I felt it was above my spinning capability and just kept it to pet and admire for a while. 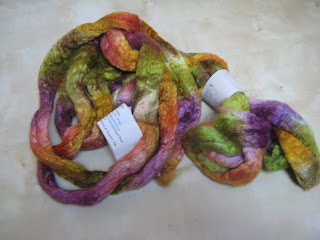 At the LG Library Knitting Retreat in January I spun half of it into a fine single, and spun the other half over the following few weeks. The colours in the singles were lovely, but I didn't really do anything other than just ply the 2 singles, rather than attempt any colour matching. Actually I didn't do a good job with plying; the plies were loose and I was concerned that I would not be able to knit with the resulting yarn. The colours also seemed rather muted - not like the vibrant colours of the fibre.

However, the knitting was not as bad as I feared and I knitted the yarn into a Travelling Woman shawl. The colours developed into lovely soft stripes and the loosely plied yarn resulted in a really soft knitted fabric. 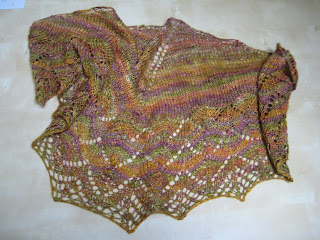 The colours are actually more accurate in the photo below - it's a really rich golden orange colour with flecks of green and purple. 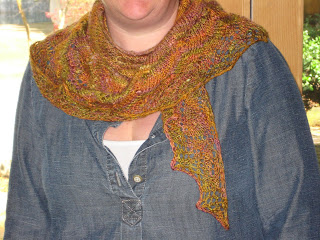 I used my new Knitpicks blocking wires which made it really easy to get a nice shape to the shawl and to get the scalloped edge. Travelling Woman is a good pattern for handspun, or any time when you don't have much yarn as the yardage requirements are pretty small.
Posted by Alison at 7:03 PM No comments:

Today I ran in the St Patricks day 'Go Green' 5k - my first 5K and the culmination of the Couch to 5K training that I have been doing. It was an early start as the race started at 8am in Vasona Park and of course the clocks went forward overnight. There were 1700 runners, the majority were doing the half marathon, or 10K course, but there were several hundred 5K runners. Here we are at the off... I'm in the pink shirt and black capris. 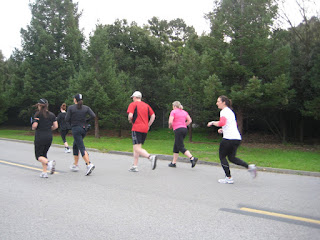 The cheering crew (Nigel and boys) cycled around the course and cheered me on at several points which was lovely - and very encouraging. I have a load of photos with me getting progressively redder in the face. This photo is taken about 2.5 miles - I'm still smiling! 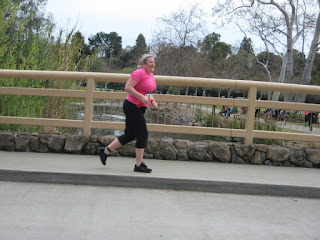 Adam caught this photo of me going over the finish line. I don't have my chip time yet - but my iPod registered about 39 mins. (The Nike + also recorded the distance as 3.5 miles - so maybe it's not as well calibrated as I thought!). 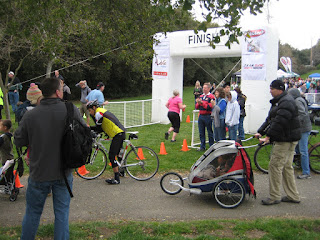 Finished! The boys were delighted at the food that was available at the finish line! I was pleased that I ran the entire course, and kept a consistent pace for the whole time. 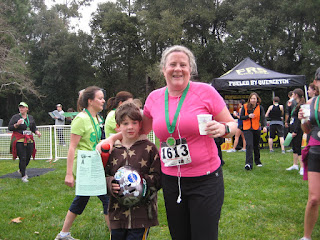 It was fun to do a race almost on the doorstep - we didn't have to worry about parking as we all cycled down to the park. It was a fun atmosphere - although the race organization was rather lacking - a load of 5K runners apparently headed down the 10K route as there was no one to direct. I didn't have a problem as I run in the park all the time so knew which way to head - but it was not well marked. We did get a cute finishers medal.

I'm most pleased with myself that I really did go from couch to 5K...! Having never run before it was a really easy progression to get to running 3 miles. I started really slowly, but once I got into the routine it was really rewarding to see the distance increase every week. Now I need to set another objective to keep up the training.
Posted by Alison at 11:39 AM 2 comments:

New toy and some sewing

I got a new toy last week: 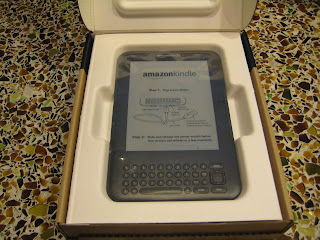 I was able to go to the library to try out a number of different eReaders and without much difficulty decided on the Kindle. The only disadvantage to it is the lack of library support - I can't borrow eBooks from the library in Kindle form. The size, weight, and page clarity of the Kindle compensated for being tied into Amazon and the agency pricing scheme of the publishers. I don't plan to give up print books, and still expect to use the library extensively, but for traveling the convenience of being able to take along multiple books is terrific.

I was traveling to LA last week and decided that I needed a case for the Kindle to give it some protection. I wanted an envelope case rather than a book-like case so got out my sewing machine and my box of fabric (fabrrrrrik). 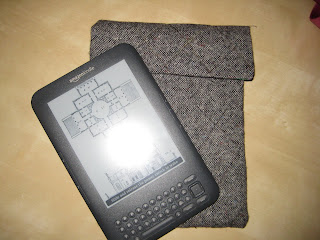 I quilted a piece of fleece onto a wool tweed remnant (office skirt circa 1996), and lined the whole with some cotton batik (summer skirt circa 1999). This was really a prototype and the flap is not cut exactly and does not really lie flat. I plan to put some velcro as a fastener. 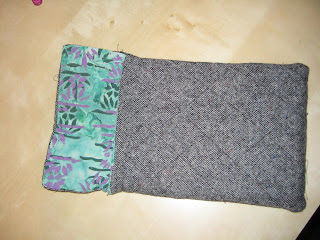 So, not the neatest but it serves the purpose and I think I will make another one more neatly next time I get a moment. The quilting gives some protection, but the case is still pretty flat and slipped neatly into my laptop bag. I read 2 books on the Kindle while I was in LA - and already really appreciating the large amount of reading matter in a small package.

So far I have managed to get the internet interface working, but not yet experimented with putting pdfs onto the Kindle. Lots of scope for messing about with it!
Posted by Alison at 10:17 AM 1 comment:

Off the needles: on the hands

When I saw Spilly Jane's beer mitten pattern I knew I had a willing recipient for some mitts. Nigel actually requested fingerless mitts, and we agreed on a guinness-only design. 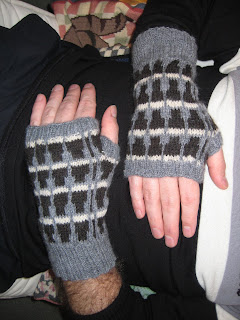 These are knitted in Knitpicks Palette yarn in grey, dark brown, and cream. They were a really quick knit, and pretty easy as there is little shaping in the mitt, so the only thing requiring concentration is manipulating 2 colours at a time.
Posted by Alison at 10:17 AM No comments:

On the needles: Silken Scabbard

Whilst at Stitches I saw a sample sweater hanging in a booth that caught my eye. I bought the pattern for Silken Scabbard and set about looking for yarn. I wanted a smooth finish yarn to show off the cables, and something summery as I planned to knit the short-sleeved version. 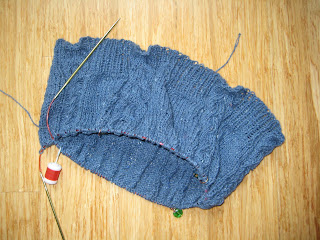 I selected Kollage Yarn's Riveting which is made from recycled blue jeans. It's a light worsted/fingering weight and lovely and soft.

After casting on and knitting the raised collar twice, and ripping it out, I started on the summer neckline variation. I dispute the comment on the pattern that "it almost knits itself"!!
Posted by Alison at 5:25 PM 1 comment: