Today IBM had a BBQ for employees in Vasona Park. They provided Beer, Wine and a choice of BBQ or Indian food, as well as some competitions and games.


Nigel, Finlay, and I went along, each equipped with a hat for the silly hat contest*. Finlay was the runner up and took away his very own camping chair. He was more pleased than you might imagine with it! Here he is pictured with the winner, Shaun, and his prize. 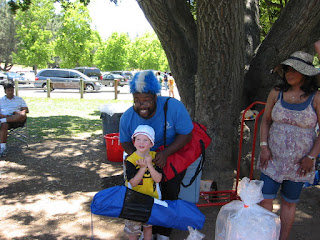 I was astonished that he was prepared to stand in front of a crowd of people while the winners were chosen by an informal "clapometer".

*Actually Nigel wore a hat for sun protection, not intending it to be silly, but still came close to winning! I wore one of the knitted pirate hats and also garnered a good round of applause - probably for wearing a knitted hat in 90 degree temperatures.
Posted by Alison at 1:59 PM