Last weekend was Stir-up Sunday, traditionally the day to make your Christmas pudding. I followed tradition and made my pudding on Sunday, having made my Christmas cake on Saturday.

I used Nigella Lawson's recipe published in How to be a domestic goddess. Alison made our pudding for us last year as we were without a kitchen until Christmas Eve, she used this recipe and it was delicious. I hope mine tastes as good. 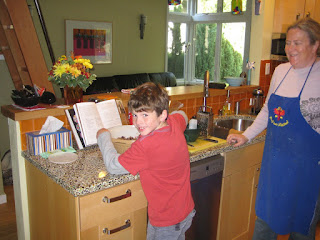 We all had a stir for luck. I added some cleaned dimes so please hope that we remember that they are in there and no one chokes at the Christmas dinner table. I feel rather industrious with the puddings made and the cake marinating in brandy.
Posted by Alison at 5:38 PM No comments:

We celebrated Thanksgiving this year in our now-traditional manner: with a trip to Disneyland. We were really lucky with the weather as rain was forecast, and although it was cold, it did stay dry. 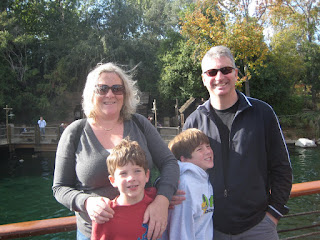 Here we are on the Columbia sailing ship - a perennial favourite. The park was busier this year than it has been in the past, maybe because we were there the day before Thanksgiving rather than on the day itself. Either way, we still go to go on a selection of rides - bearing in mind that only 2 of us (Adam and me, and Adam to a much greater extent than me) likes rides!

We stayed in the park to watch the fireworks for the first time and it was lovely. The boys were particularly impressed with the fake snow in Main St at the end of the display.

The following day we headed out to Long Beach to stay on the Queen Mary. It turned out to be a fabulous trip for us. We stayed in the Eisenhower Suite - previously occupied by the President, as well as Bob Hope. It was lovely in it's faded grandeur. 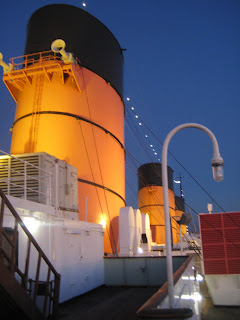 There are a lot of exhibits on the ship's history and the boys were really interested in it's wartime service as a hospital ship. It also carried GI brides to the USA after the war ended which I found interesting - overwhelmingly the comments from the British brides were on how good the food was on board - I guess after many years of strict rationing it was amazing.

I loved the Art Deco details of the ships public and private rooms and it was particularly nice to go on deck at night and look at the ship and the port of Long Beach lit up. The Queen Mary has had a chequered history and I hope that money remains to preserve this lovely ship. If you are in the area I encourage you to visit - and, even better, stay on board.
Posted by Alison at 5:30 PM No comments:

On October 6th 1985 I walked through the doors of IBM Richmond to start my career with IBM. At the time I was really excited to land what everyone told me was a great first job - never for a moment did I imagine that 25 years later I would still be there. What's more is that I am essentially doing a very similar job to the Systems Engineer job I started in.

IBM likes to mark this anniversary as a significant milestone, although I suspect that there are fewer of us achieving this longevity of service these days. You get to choose a nice gift (in my case a watch - liked the 25 years on the railways idea of a watch). You also get taken out for a lunch by your manager, fortunately I really like my manager so lunch with her is a pleasure. 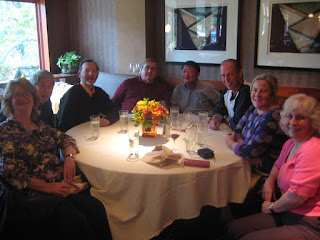 I invited the members of my team, and former team, who are local, some of whom I have known since I came to the USA in 1997 and have been long-time colleagues. My guest of honour was Christina who came over from the UK to join in the revels (and also have a holiday).

Lunch was at the Californa Cafe and I had a lovely time. I ate at the California Cafe the first time I visited San Jose in 1992 and loved Los Gatos then. For a long time I hoped, but never expected, that I would come here to live.

Its been an interesting 25 years. I have stayed in a technical role which was something that IBM always promised; career progression on a technical track. I've been on assignment - once to Rochdale, Lancashire with Woolworths, and now to the USA (much better option), as well as travelled around the world with work. I've met a lot of interesting people and made some long-lasting friends (24 years with Christina for example!). While I'm rather shocked to realize that I'm old enough to have been working for 25 years, I've really enjoyed marking this milestone and reflecting on what has already been an interesting career - and it's not over yet!
Posted by Alison at 5:14 PM 1 comment: