For many months in 2006 and 2007 I was working on a large knitting project. Although lots of people saw me knitting it, the item didn't appear on the blog because the intended recipient is an avid reader of Ferretworld: my father. I finished the sweater late in 2007 but wanted to wait to give the sweater to my father in person. They just arrived to visit us and so I was able to hand over the guernsey.

Here he is modelling the finished garment: 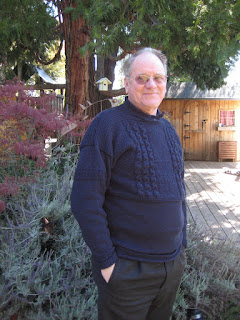 It's a guernsey sweater knitting according to the Caister Guernsey pattern in "Knitting Traditional Sweaters" by Madelaine Weston.

Christina and I both knitted guernsey sweaters as part of a 2-person knitalong. The interminable progress of the knitting is documented at Knitalong including my plans to knit my father's initials into his sweater. 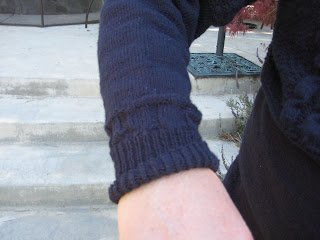 I was pleased when i had finished the sweater - it was a challenge of my knitting abilities, and I was quite happy with the results when I packed it away in December. I did also have a small concern that it might not fit well as the sizing was based on secret measurements taken by my mother.

However, not only does it fit really well, but in the 5 days since he received it my father has not removed the guernsey which is very gratifying...almost gratifying enough for me to knit another...almost!

These are the latest in my quest to clothe my entire family in hand-knit socks. They are the usual pattern knit in Socks that Rock Lightweight in the Lunasea colour. 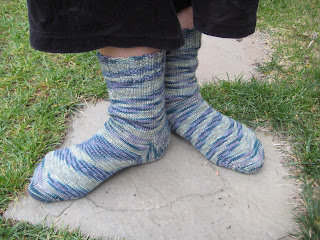 They are for my mother who requested thinner socks for her walking boots - these are pretty fine weight, but if they dont fit well then I will appropriate them as they fit me. There is no truth in the suggestion that I chose this yarn for mammie based on it's name (lunasea=lunacy?).

I knitted these with my lantern moon dpns (2mm) - I love these needles; the smooth wood makes knitting swift, but there is enough 'grab' that I dont typically drop them out of my knitting. However, there is always a first time and I recently lost a needles while knitting at the school play. I substituted a crystal palace bamboo needle (2nd favourite) and continued.
Then it occurred to me that since Lantern Moon will replace broken needles, they might sell me a single needle (these run about $20 for the set so I didnt really want to buy a whole set if not necessary) so I called their customer service line. Anyway not only did they replace my lost needle free of charge, but they also sent me a spare. I dont think I will buy any other brand of wooden needles again!
Posted by Alison at 10:44 AM No comments:

In tandem with Adam reading his 100th book, Finlay read his first book on Sunday. 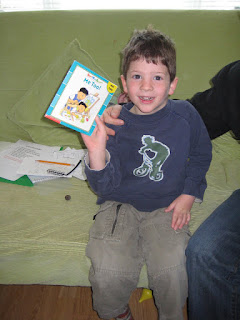 He had some help with some of the letter sounds - but it was almost all his own work. We celebrated with ice cream!


Excellent job Finlay!
Posted by Alison at 8:10 PM No comments:

To celebrate Easter here is a link to a pattern I cobbled together last year for Nancy.

Nancy had worn out a much-loved pair of crochet bunny slippers and I tried to recreate them. I started with a Lion Brand pattern, but modified it for better fit and shape (but I did keep the bunny face and ears the same). I used these Knitpicks suede slipper bottoms. You could use fabric paint to make non-slip bumps on the bottom too if you like.

They turned out pretty well in the end (although one of my 'swatch' versions fitted me), and Nancy was pleased. 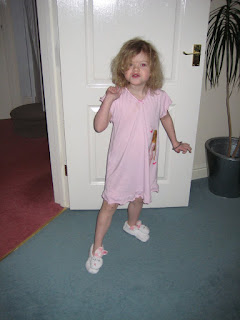 Christina wrote up the pattern from my notes and test knit it. I'm linking to the pattern again for those folks who find this blog searching for "bunny slippers"... aplogies to those who arrive searching for ferret-related stuff!
Posted by Alison at 10:53 AM No comments:

On the needles: Kusha Kusha scarf 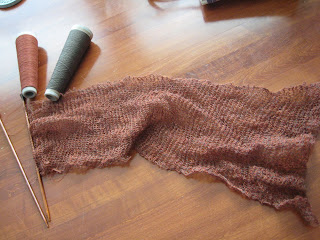 The interesting thing about the scarf is, of course, the yarn. This is knitted in 2 yarns: the orange is a merino wool, the grey is a stainless steel and merino mix. Yes, that's right, stainless steel.

Of course its not the softest of yarns, after you complete the knitting you should lightly felt the scarf which causes the merino to bloom and make it softer. However, its not quite as bad as knitting wire either. The knitted fabric is quite light and airy, but because of the steel content you can scrunch or twist it, and it retains it's shape.

I think this is quite the oddest thing I have ever knitted.
Posted by Alison at 1:40 PM 1 comment:

All I want for Christmas... 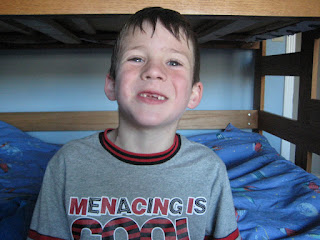 Adam lost the second of his top front teeth at the weekend (after days of the thing hanging on by a thread) and now looks like some sort of Norman Rockwell picture.
Posted by Alison at 7:38 PM 1 comment:

Adam and Finlay recently discovered from their grandmother that their Father's favourite childhood meal was toad-in-the-hole. This was a treat for the first and last day of school.

Since then they have been begging me to make them toad-in-the-hole and yesterday I obliged: 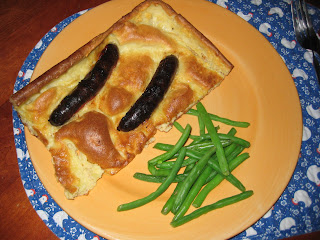 I couldn't find an actual recipe for toad-in-the-hole but I used Delia Smith's Yorkshire Pudding recipe with chicken and apple sausages that had been browned on the BBQ. 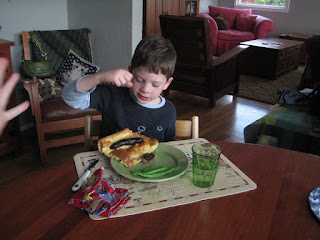 It went down well!
Posted by Alison at 6:06 PM No comments:

In my youth I attended many concerts (or "gigs" as we preferred to call them); I got to meet my musical hero (Feargal Sharkey of the Undertones) outside the Portsmouth Locarno*; but I never scored one of these: 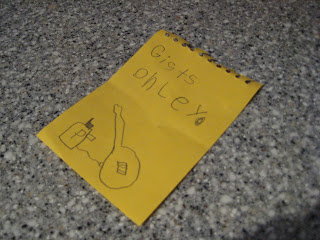 It is, of course, a backstage pass. The boys entertained themselves (and us) all weekend with the preparations for a concert to be given by themselves to a select audience (Nigel and I). They selected their costumes (sunglasses and baseball hats), practised lip-synching to their playlist (High School Musical and The Backyardigans), and issued numbered tickets, as well as the treasured passes.

Possession of the pass entitled the bearer to go and sit on the bottom bunk along with "the band".

* While googling the correct spelling of Locarno I found this: http://theundertones.net/ugigs.htm a list of all the Undertones gigs. I think I met Feargal during the 1980 tour as it was not the first time I had seen them and I think I saw all their appearances in Portsmouth!

On the needles: Lady of the Lake

Well, the Ribby Cardi is in timeout - waiting for me to go to the wool shop in daylight to match a new colour for the body. Advice from my knitting group (Thanks Mary!) has persuaded me that I am never going to be happy with the purple and I should look for a colour that better matches the overall pink/orange tones of the sleeves.

So to cheer myself up I cast on the Lady of the Lake jacket. 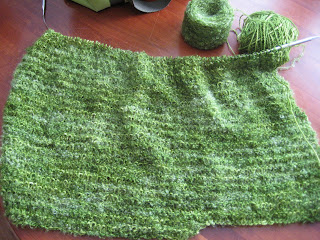 The colour is lovely and the yarn is knitting into a light yet textured knit. The jacket is knit from two yarns: and aran weight and a fine boucle. 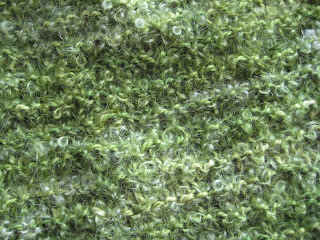 I had assumed the yarns were knitted together, but on receiving the pattern I realized that it was knit in a most unusual way: knitting each row with each yarn, with a 4 row repeat, the boucle is knit every alt row and the aran k1p1 every alt row. The effect is terrific and because its knit on 7mm needles its growing quickly.

A corner of my home

I have seen on other people's blogs that they occasionally post an artistic shot of a corner of their home. This usually showcases some delightful object or furniture.

Here is a corner of my home... 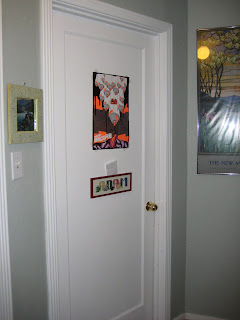 The delightful artistic object is an embroidery that my mother made, she made one for each boy...but look closer... 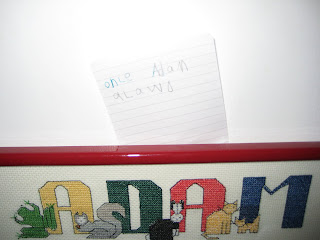 Posted by Alison at 8:15 AM No comments:

I have finished the sleeves of my ribby cardi and cast on the the body... 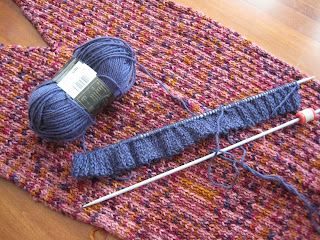 and I don't like it.
I selected the purple colour for the body because it picks up one of the colours in the handpainted yarn. However, the impression of the sleeves is of a pinky-orange colour and that, together with the purple just doesnt look nice to me. I think I may go back to my original plan of dark brown for the body, but in the mean time I will just set it aside and knit my green jacket.
Who knows - maybe after an infusion of bright pea green the purple/orange combo won't seem so bad!
Edited to add: When I got my knitting out in daylight to take the photo, it didnt seem so lurid as under artificial lights. That maybe OK as long as I plan to wear the cardigan in daylight.
Posted by Alison at 3:11 PM 1 comment:

Treats in the mail

Becky at Skacel came good on her offer: This week I received a parcel from Skacel containing the replacement ball of Austerman Step, in a different colour, as requested. 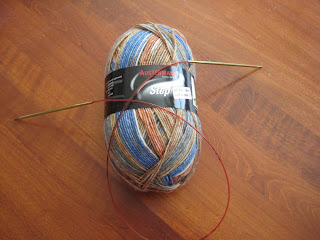 She also included these needles which appear to be Addi needles - but are gold coloured rather than the usual nickel. Anyone have any idea what these are? I'm not complaining either way.


When I got back from New York this was waiting for me: 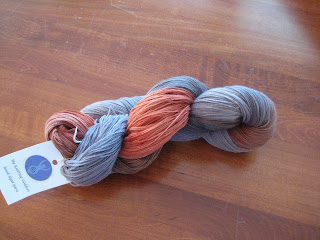