I have been practising with Spinning Julie. Last week I had a spinning lesson with Amy which helped a lot. Since then I have plied some yarn that I spun on my spindle, and some that I have been spinning on the wheel.

This is the spindle yarn, I dont know what the fibre is, but its not very soft. I bought it at Lambtown last year and it has made quite a chunky yarn. 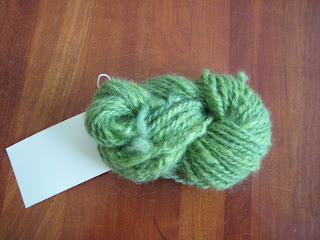 This is some BLF that I bought to practise with on the spindle - this fibre was rather felted and the yarn is also rather chunky. The colours worked out nicely. 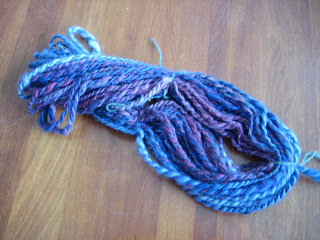 Here is the stuff that I have spun since my lesson - it's still very thick-and-thin, but a lot better than the purple stuff. I plied it as a 2-ply, but also had a go at Navaho plying, which looks better for this yarn, but I had very thin singles and was obviously rather rough with my plying as it kept breaking. 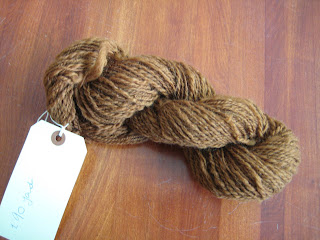 Still, I have a pound of the orange stuff so I have a lot to practise with!
Posted by Alison at 1:22 PM

It's so cool that you're making yarn!

Your plied yarn is streets ahead of my first attempts - which looked almost bouclé due to uneven twist on the singles - and to be frank not sure how much I have improved!! But I still managed to knit with it.
...I look into your future and I see a hat....