Guess where we spent the last few days of our vacation? 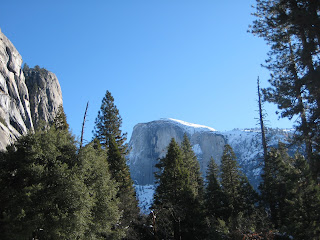 Nigel and I spent our Honeymoon in Yosemite 10 years ago. While we were there we promised ourselves that for our 10th anniversary we would go back to the Awahanee and stay in one of their cottages. I think at that time we did not anticipate making our anniversary trip with 2 boys in tow - but as it turned out we all had a fabulous time. 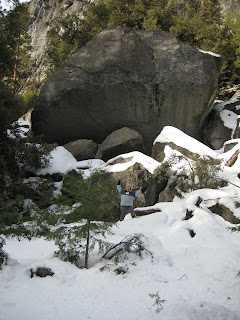 We arrived in pouring rain, but it cleared up and we were rewarded by a couple of beautiful sunny days. It was cold, and there was a lot of snow on the ground, and trails were icy, but the boys loved playing in the snow, skating on the frozen river, and climbing any rock they could find. 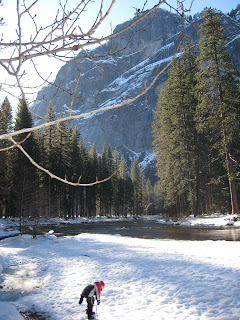 I think there was more water running in the park than I have ever seen, and the waterfalls were beautiful. We also walked around to Mirror Lake and admired the reflections in the lake's surface. 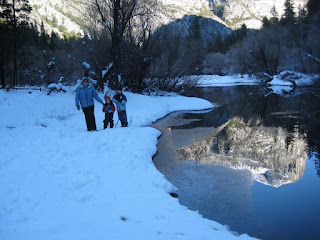 We saw deer, and lots of squirrels, but no bears. I assumed they were hibernating, until we came across this: 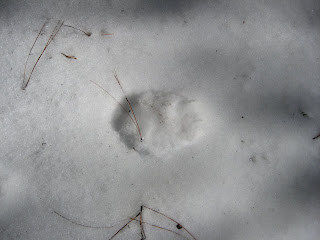 You can clearly see the claw marks in the print. Finlay carefully drew all the prints we saw into his journal and laboriously labeled them.
We had not been to Yosemite for 2 years are realized how much easier it is to travel with 6 and 8 year-olds rather than babies and toddlers. I forsee more trips to Yosemite in our future.
Posted by Alison at 4:31 PM

I haven't been to Yosemite for years and years! How beautiful to be there in the snow. Happy Anniversary!

We went to Yosemite too! It was lovely.
Alas I had a cold and now have two ear infections, likely viral and am mostly deaf as a post (and very unwell to boot).

Looks like a great trip! Yosemite looks great covered in snow. Glad you got some sun there. Would keep in mind about traveling with the toddler. Happy anniversary.