Nigel was busy this last weekend, so the boys and I had a crafty weekend.
We got a head start on the valentine cards. Each class has a valentine card exchange, for which the etiquette is to send a card to every child in the class. Home-made cards are encouraged. This of course means that the frazzled parent has to assist with the creation of 20 cards, usually the night before the party. This year I thought we would get going early.
The boys decided on a magic theme to thier cards and wanted to put a moon and a wand accompanied by the message "You're Magic". We made the cards using potato prints and a canibalized purchased stamp for 'wand sparks'. It was a lot of fun! 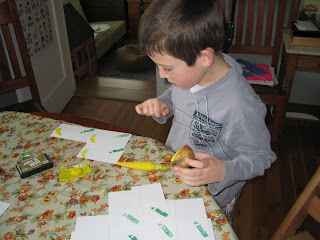 We discussed production lines as Finlay was commenting on how efficiently we were making the cards. 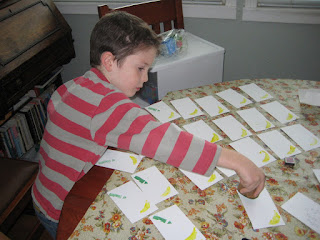 On Sunday we went to Green Planet Yarns where Tyler was demonstrating his antique sock knitting machine. 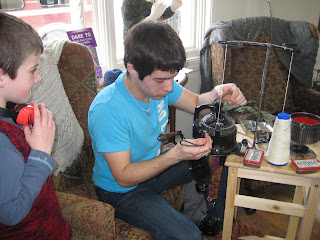 It's about 100 years old and he restored it to operation. It was fascinating and Tyler did a great job of explaining how it worked. The boys paid attention, but didn't seem that interested - until they were telling Nigel all about it later when I realized how much they had absorbed. 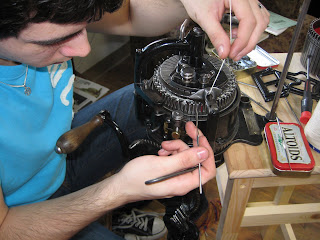 They think I need one so I can make socks quicker!
Posted by Alison at 3:42 PM

Nice to see Tyler making good use of the old Altoids tin ("accept no substitutes") - or was it his refreshments?!