What a tangled web...

The boys' school hosted a vistiting artist a few weeks ago. Travis Meinolf is a young and hip weaver who brought his portable rigid heddle loom into the school. His home page actually shows a photo that was taken at the school and you can see him at the start of the project: the children brought in items to be woven into a hanging. The finished result included all sorts of materials, I saw leaves, wire, a serial cable, a slinky, phone cord and so on.

He was packing up his loom as I was collecting Finlay from school and Finlay insisted that I go and look at the weaving that the school had created. Both my boys were pretty excited by the project and we talked to Travis for a little while. He told us about the instructions on his website for making a loom out of cardboard and gave us a card loom that he has developed for use in schools.

We used both his card loom, and made our own out of card. This rather blurry photo shows the weaving process. We tied one end of the warp to the coffee table, and the other to a pencil. I held the ends firm while the boys used an elastic bodkin as a shuttle. 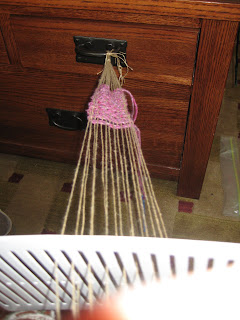 We used a variety of yarns for our weaving, but the best results were using Noro yarn for both warp and weft threads. Here are the bookmarks that the boys made: 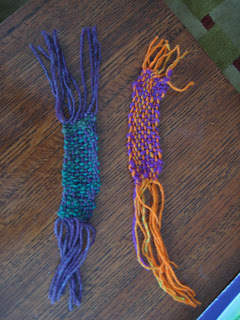 They were really pleased with thier bookmarks, especially as they achieved pretty good results in a short time. 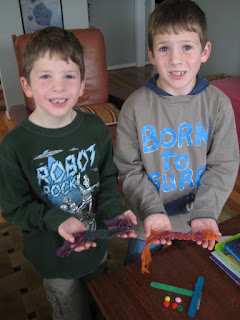 Great work, Boys!
If only my weaving made such great results. Bookmarks for all for Christmas....?

I met Travis at a Craft Magazine event up in San Francisco. He's a great guy!

Your boys are so cute!