Out and About in Alameda

The boys have a few days off school making this a long weekend. We thought we would re-visit the USS Hornet. We last went there on my Father's 60th birthday (boy - does he know how to celebrate!!). 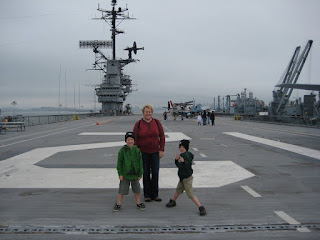 Anyway, it was a good place to visit with the boys. They were especially interested in the role the Hornet played in the Apollo missions. 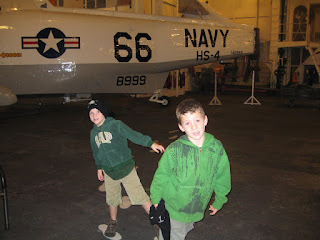 Here they are walking in the footprints of Armstrong, Aldrin, and Collins. We managed a tour of the flight deck, the hangar deck and some of the lower deck. There is a lot more restored since we last visited, but the best part is still the docents, who are largely veterans, many having served on the Hornet itself. They have the stories that really make a visit come to life.

After the Hornet we headed off the Naval base and towards Washington Park. We got on our bikes and headed off along Shoreline drive. There is a bike trail all along the beach. 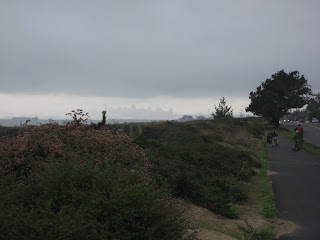 There was a slight drizzle during the ride - but in this photo you can see Nigel and the boys on the bike trail, and in the distance, wreathed in mist, San Francisco.

We had not really seen anything of Alameda previously, apart from the Hornet, and it looked really nice. It was great to be able to ride alongside the beach and the whole area had a real vacation feel to it, rather like Bournemouth we thought!

Interesting!
Oddly enough, I had a dream last night that I visited an old US warship that had been turned into a theme park and shopping mall! It took me half an hour to ride to it and I got there faster than the (trolley??) bus. LOL
I'll have a little news for you in a bit. Do you like sock yarn?

I rather adore Alameda. A cute little downtown and rather a lot of coastline for a town on the bay. Good birding there, too!