Lying under the lizard

It's finished! Off the needles: Lizard Ridge. 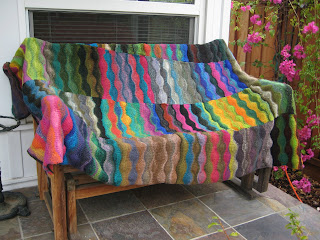 I decided to stick at 24 squares and keep the blanket for use as a throw - or maybe in Adam's room when it gets cold. I knitted an i-cord edge in Mission Falls Dk weight wool in a dark olive green. The boys were sitting under half of the blanket watching Star Wars on Saturday while I finished the edge.

I really enjoyed knitting this - and it was much quicker than I expected. The squares mostly could be finished in a couple of hours of knitting. It took me 3 evenings to seam it and about the same to knit the i-cord edge. I decided to sew the squares alternating the direction of the pattern, ie sewed each 'strip' with the same direction, but alternated the direction of the pattern when sewing the strips together. This gave a more patchwork look rather than the wavy pattern continuing across the blanket.

I managed to get most of the Kureyon with some discount or other. I used 22 balls, two of the squares were patched together from left-overs. I had plenty of wool left over and could have made up more squares - but my colour combinations just were not as nice as the Noro ones so I decided it was worth buying the additional balls...Im sure I''ll find a use for Kureyon scraps sooner or later.
Posted by Alison at 8:51 PM

It's really beautiful. I love that pattern.

It's so beautiful and inspiring! Gonna have to go find some yarns on sale!

The colors are wonderful and it looks so warm.
Billie

Oooh, lovely (and even better? Finished! :-)

Wow - impressive! It looks great. And already a hit with the boys, it sounds like.