I'm a little late in updating, but the final day out of our long weekend was to Castle Rock State Park. Adam and Nigel had visited previously on their backpacking trip, but it was the first time I had been there. It was an interesting mix of shady and wooded areas, with large boulders and trees covered in moss, and in the sunshine steep hills covered with manzanita. 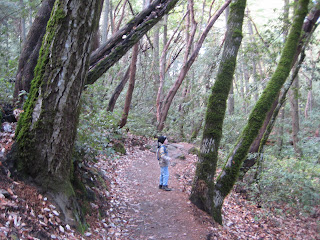 We walked for about 1 hour 45 minutes, we got as far as the Goat Rock formation before turning back. We were rewarded by some great views across the coastal range hills. The trails were quite steep and required some scrambling, of course this added to the appeal for the boys. 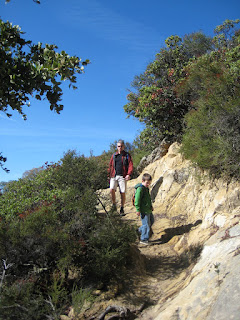 There was only a little water in the Castle Rock falls (below) but we stopped for a while to listen to the water. Several groups of climbers arrived while we waited there to discuss a decent. On their last visit Adam was thrilled to watch climbers ascend this cliff. 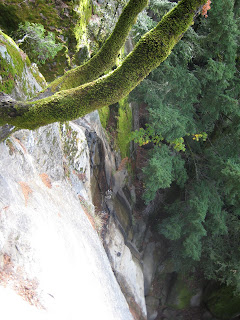 We had a nice walk, and picnic, and made plans to come back to this park again, although I have not yet been convinced to hike to the campground there! It's so close to home, and a nice alternative to the redwood forests. The boys especially loved climbing on the big rocks.

I haven't looked at the Castle Rock side but I was up there on my birthday (miserable day it was too!). I have not edited the pics yet for Flickr/blog but I got two great shots that do a 3d effect.
Mebbe we can go visit it this weekend in our Car!