I've started a new project, and rather unexpectedly, it's a blanket.

I always insisted that I would not knit a blanket (called Afghan by Americans...no idea why) and could never imagine that I would have the patience to knit something that large and boring.

Then Rachel knitted her Lizard Ridge and began to see the appeal of it. The pattern is built like a patchwork of blocks, I'm knitting mine as shown in the pattern in multiple colours of Kureyon. The idea is to buy the yarn when I see it on sale, and knit the blocks as they come. Here is the first one: 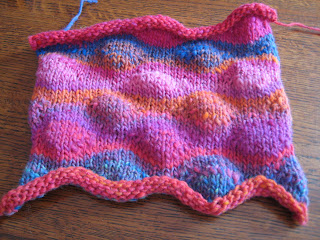 Noro Kureyon in colour 102. The eagle eyed will notice that its knitted with too few repeats - what is especially galling is that I knitted the 4 repeats (as specified in the pattern) then ripped out the 4th due to an incorrect reading of the pattern. I have since printed a version of the pattern in a large print so I dont have to keep putting on my glasses to read it while knitting.

I think this is a good solution to my desire to knit the beautiful colours of the Noro yarn, without really having a need for any more handknit sweaters ever!
Posted by Alison at 10:11 AM

I like blankets, but there is a lot of knitting in them. The colour you've chosen is lovely.
You made me look up Afghans which apparently derive their name as they "resembled a particular type of colorful rug brought [to America] from Afghanistan".

Alibobs. I love your Lizard Blanket!!! Your knitting is fab. Every bit as nice as your spinach roulade!
Will read more blog soon. Off to watch Taggart. This is probably not what I should put in your comment spot but....dunnit now.
love Liz xxxx