I have had my eye on the PaperDolls sweater from Needled designer Kate Davis for a while but thought I would warm up by knitting my two Dollheid tams as I was not sure I would have the patience for a sweaters worth of dolls. However the tams were so much fun to knit that I started the sweater. On 2.75mm needles it was rather time consuming, but actually I had more trouble with the black stockinette than I did with the colourwork. 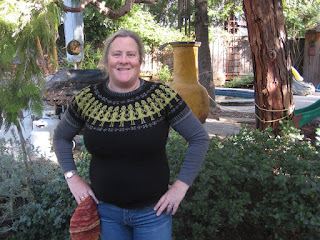 I didn't knit the corrugated rib around the bottom of the sweater as I didn't feel I needed a horizontal band around my hips. I would have knitted the i-cord cast-on, but I was afraid I would run short of wool so knitted a plain 1 x 1 rib. I had thoughts of an applied i-cord hem, but this has not materialized and the sweater does not seem the worse for it.

It's knitted in Jamieson's Shetland Spindrift which has the authentic scratchiness of real shetland wool. I used Black, Grey, and Chartreuse colours. I got the black from a Ravelry sale, and ordered the other colours from Schoolhouse Press.

Part of my desire to knit a yoked shetland sweater was based on the sweaters my Nana knitted for us when we were children. I particularly remember one with maple leaves around the yoke - so this was partly a sentimental project. 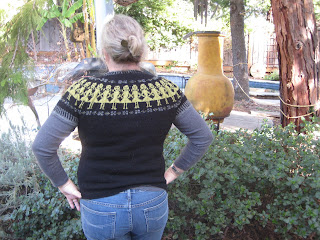 I knitted it for the pleasure of knitting rather than in expectation that it would suit me, however I actually love it and have already worn it twice. I had no plans for more dolls, but after being afraid of running out of wool, I actually have 3 balls of black, 1.5 grey and 1 green left - so maybe an other doll tam is in my future. I could knit those little dolls in my sleep now!
Posted by Alison at 11:45 AM