I didn't do a lot of Christmas knitting this year - and apparently didn't take photographs of all that I did knit.

I made my mother a Dollheid tam like mine. I chose the colours online and they are not quite a subtle as I expected - but I think the blue will look nice with my mum's colouring. 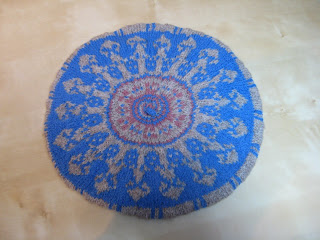 Maybe I can persuade my father to take a photo of her in the hat? Perhaps I could get him to photograph the other hat and scarf I made for her (poor woman was the recipient of most of this year's hand-made gifts!)?

My sister was in receipt of a flat hen - she admired my hen doorstop so I sent her a doorstop kit rather than send Nigel back to the UK with 2lb of sand in his luggage (tempting though that was). 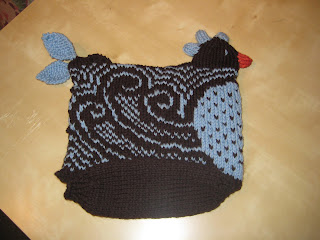 This is the same pattern and chart as my chicken but knitted in Cascade 220 which worked better as it created a tighter and slightly felty fabric that I think is better for a doorstop. I made a hole in the base for stuffing rather than the usual construction. I decided that kitchenering live stitches was too much to ask a non-knitter. Right Gill?
Posted by Alison at 5:02 PM

Sorry for tardy reply, yes so right Alis! It's so lovely my little henny.