Adam has roller blades, when Fin wants to skate he wears my old blades (which have been in a cupboard for at least 10 years). On Saturday they decided to play street hockey - we have a single street hockey stick from somewhere or other. Lack of ingenuity is not a problem in this house... Fin found a piece of redwood and asked Nigel for help with sawing and screwing... and made his own hockey stick. 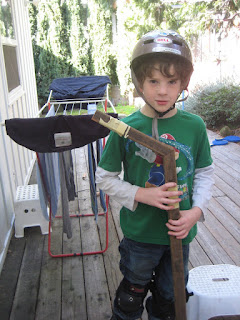 They played hockey on the 'pavement rink' - a small car-park at the bottom of the road. A sporty neighbour offered Fin a real stick - but Fin declined preferring the stick made to his own design. They played for hours all weekend.
Posted by Alison at 7:44 PM

Creativity, figuring out how to get what you want with what you already have, and the satisfaction that comes with it. Love it!