I knocked out another pair of socks for Nigel. Using my default sock pattern in a k3 p1 rib. 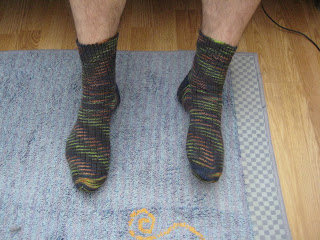 The yarn is some of the superwash sock that I bought from Tess's designer yarns at Stitches 2008, however I was not that impressed with it. Although the wool is soft now the socks have been washed, it had a hard hand while knitting, however, the worst problem was this: 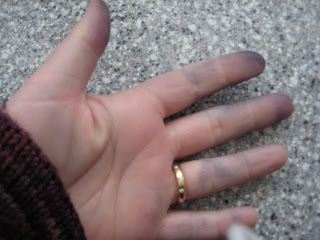 This is my hand after only an hour or so of knitting, the yarn leaked dye every time I knitted on them, and a lot of the dark blue appears to have washed out. I washed them twice with jeans so far and the blue appears a softer shade than it was when I knitted them up.

The finished object has received the Nigel seal of approval, but I'm not sure I really want to knit up the other skein of Tess's sock that I bought. Its a lighter blue so Im assuming the dye leakage wont be so bad, but I am much prefering knitting with the Austerman Step that is currently on the needles. I did see on Ravelry that other people were having problems with dye leakage - but the yarn gets raves on its long-wearing properties so that is good news.

That hasn't happened to me, but I did have some Koigu that stained my bamboo dpns. Hopefully no more dye will come out after the first wash.