Tales of the city

We went to San Francisco on Sunday. It was a lovely day - clear skies, 74 degrees or so. First of all we took a cable car to the top of Nob Hill. Both boys did eventually take seats on the outside of the car (after much persuasion on F). 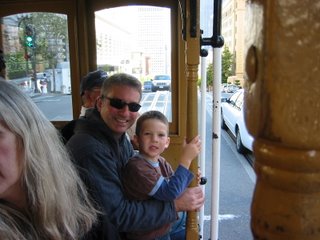 Then we walked down to Chinatown, where there was a lot going on. We saw an old man playing some instrument that looked like a tin can with a stick stuck in it, he was playing it with what looked like a violin bow. We have no idea what the instrument was but since it sounded like chinese music sounds we assume it was a tradtional instrument. (Who knows - could really have been a retired violinist fooling us all).

We also saw some dragons and acrobats. Here is a photo of the acrobats - they were perfoming on top of plinths about 6' off the ground. I would have taken a photo of the dragons, but F was holding tightly onto my head and struggling to get away (!).

I think this might have been rehearsals for the Autumn Moon festival which is next weekend. 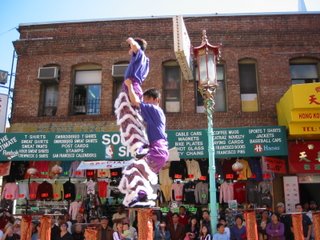 Finally we wrapped up with Dim Sum for lunch. Adam was very adventurous and tried everything including tea. Finlay polished off a plate of pretty spicy noodles but didnt really want to try anything else. They both attempted to eat using their chopsticks with fairly predictable results, however with more success than the middle-aged midwestern tourist on the next table. 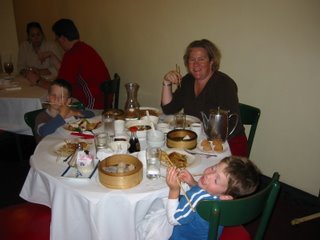