I made us a tent

While Nigel was away this week I thought I would entertain myself with some sewing. I had been planning a dress like this since I saw one in the Boden Catalog and here .

The fabric is a fine cord and I was really pleased with how the colours worked together. The cord was not as bulky as I had feared and the colours together with the design have a nice japanese style. 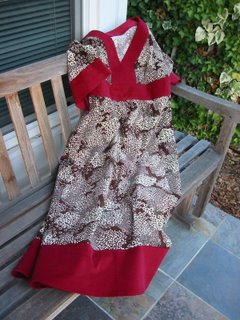 However, you will notice that its shown artistically draped on the front bench rather than modelled by me. This is not because of a lack of photographer but because it looks absolutely terrible on. I look dumpy in the extreme: the waist is about the widest point of my bust. I am wondering whether to add another waist panel, because the sleeves and other styling look better than I expected, or whether to follow Nigel's suggestion and cut it up the middle to make a rather sophisticated dressing gown.

The day was not entirely a wash-out from the creation point of view - Finlay and I made some successful brownies which were eaten for tea with much relish by all. 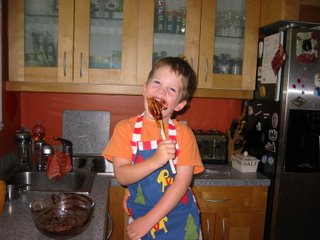 Looking back at the Dress-a-day website I see that Erin made a McCalls pattern whereas mine was a Simplicity one. I might need another trip out to see if I can find the McCalls pattern because it looks as if it might have a longer waist. Hmmmm.....
Posted by Alison at 6:39 PM

How disappointing! The dress looks really nice and I just hate that - the great moment you get to try it on and it looks terrible. I made a Golden Hands dress once which had beautiful piping (a new technique for me) and it was splendid - but looked like a maternity dress (not what I was aiming at aged 20).
I would have thought you could rescue the waist? Invent the pattern for the panel yourself?