We made a final trip to Bear Valley last weekend. Our ski trip coincided with the first Bear Valley Snowboard Cross competition. If you have not seen it snowboard cross is an elimination contest between 4 boarders on a winding course with jumps. The competition was open and there was an under 12 category so Adam entered.

He had a great time - there were only 5 under-12s entered to it seemed like Adam just enjoyed hanging out with the other competitors (under and over 12). The field was entirely male, and I would guess under 25.

The competitors got a couple of practice runs, before the actual race - here is Adam at the top of the course just after leaving the gate. 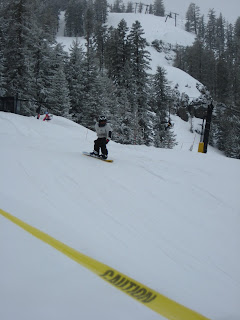 Looking down the rather daunting course as Adam does his practice run. 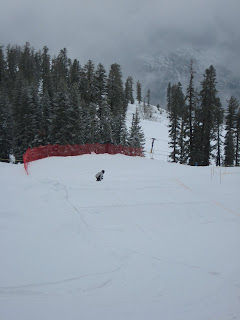 Unfortunately at this point my camera battery died so I didn't get any photos of the actual competition. It was very exciting to watch - especially when it's your child hurtling through the snow at speed.

Edited to add that the Bear Valley Photographer, Jason, took some photos and kindly sent them to me. So we got this great action shot. The guy in the green won the contest. 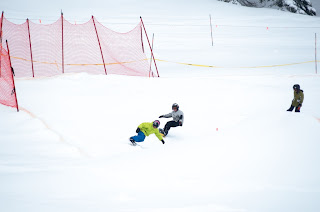 Adam was thrilled to discover that he came second in the contest and even more thrilled to discover that there was an awards ceremony and prizes. He won a night at an Arnold hotel, as well as some food gift certificates, and even better, a snowboard sweatshirt and fancy headphones! We were very proud of him - not for winning (although clearly we were pleased for him) but proud that he would go for it and enter a competition without knowing anyone else in the contest or ever having done snowboard cross before!
Posted by Alison at 7:35 PM