I signed up to make some costumes for the 2nd grade play. The play is about lifecycles and has lots of characters. I agreed to source 2 zookeeper vests/jackets, and 2 lab coats. The plan is to keep these costumes at school for future productions of the play.

The zookeeper jackets I got from Goodwill. The longer jacket had puffed sleeves so I removed those, the shorter jacket I left the sleeves on as I thought they were quite suitable for either a boy or girls. Someone else is providing hats. 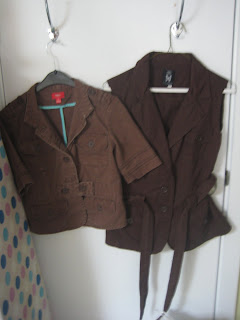 The lab coats I adapted from a couple of white shirts that another parent provided. I just modified the collars, shortened the sleeves, and added the pocket. Someone else is providing round spectacles. 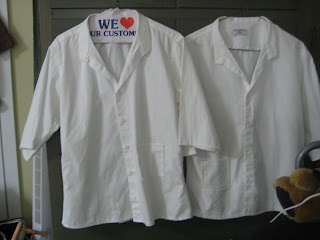 Hopefully these will work out. Of course, Fin declined a speaking, costumed part, and is part of the chorus.
Posted by Alison at 4:15 PM