On the needles: Weasely Sweaters

So, the boys are going to be Harry Potter and Ron Weasely at Halloween. Adam will be Ron, Fin will be Harry. We have already made the robes, and with help from Nana assembled the rest of the costumes. (She sent school shirts and ties from the Liphook and Southampton charity shops - thanks Mammie!).
It's usually pretty warm in October here, but sometimes Halloween can be cold, so I decided that as a knitter, the least I could do was to produce some Mollie Weasely Sweaters.

Im using the pattern from Charmed Knits which I got from the library. I'm using Webs' Williamstown in Navy for the Harry sweater, and Merlot for Ron's sweater. 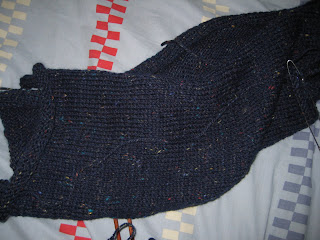 The yarn is a wool/acrylic mix and feels nice and soft. I'm planning to add the initials with duplicate stitch (swiss darning).
Posted by Alison at 7:35 PM