Saturday saw the start of the soccer season. Both boys are in a league this year and played their first ever games last weekend. 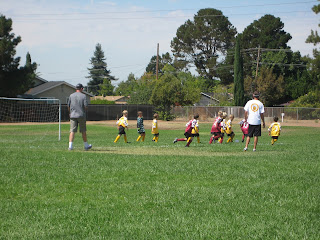 In Finlay's age group the coaches also run about on the field shouting instructions...eg "Kick it towards the goal" and "spread out". Fin* is in the middle of this shot in the maroon, playing for the Iguanas in jersey number 5.

* Finlay has announced his intention to be known as Fin and has arranged with his teacher and soccer team to call him Fin.
Posted by Alison at 7:09 PM