On the needles: sweaters

I'm breaking with a lifetime of habit here and have two sweaters on the needles at the moment.


The first is my hourglass sweater which is coming along. 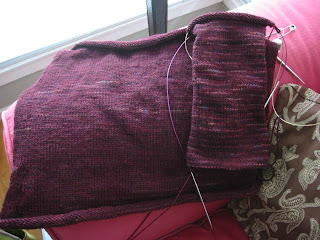 On the body I alternated from 2 skeins of yarn but Im not pleased with how the yarn carries on the inside. The sweater is knit in the round and the carrying seems to show on the outside of the sweater. I'm optomistic that pressing will fix it however have now given up on the alternation with the result that the sleeves appear rather different from the body...maybe it will look like a design element because I'm certainly not going to frog it now.

I also cast on for the chicknits ribby cardi. I have had the artyarns supermerino for a while. I originally bought it for a vest (tank top) but realized I didnt have enough - so i'm knitting the sleeves in this variegated yarn. 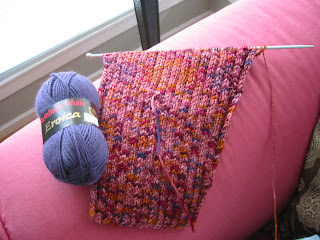 I tried to match one of the colours with the solid - in this case it's Steinbach Wolle Eroica which has the dual benefits of being machine washable and also cheap ($4.50/ball).

I love the color!

The hourglass sweater looks fabulous.
In the Vintage Sock book you gave me it gives a tip about changing colours in the round; I had often wondered about this as, especially with a thin stripe, you notice a big discontinuity at the join. Anyway, they say you should knit the 'seam stitch' in both colours together. I have not tried it yet but it does sound like it might have fixed your problem, since you don't have a colour disjoint to worry about.
I am planning to use my guernsey wool collection to knit a striped 'Breton' sweater (one day!), and will use this method to try and knit in the round.

I looked up the chicknits ribby cardigan, and love the description 'perfect AM/PM wear' - personally I don't feel the need to change knitwear at lunchtime - but for those who do I can see this would perfectly suit mornings and afternoons!