I never make any new year resolutions (probably too many years experience of not achieving them) but I do sometimes make new year plans. Ive been making knitting plans:

1. Knit the felted clogs - if they work well, knit more out of the pile of non-superwash Cascade I bought in a misguided moment.
2. Socks - got yarn for socks in my stash that I should start knitting up, mostly its pretty unexciting wool though which is why it's been languishing. I plan to knit some plain socks for Nigel, and he has also asked for cotton socks.
3. Ive got some Elann Canapone hemp yarn - I bought this to knit a shawl, I am wavering between knitting something like Icarus, or River. I think the Icarus would look nicer, but River might be more useful. The only disadvantage is that the River I already knitted is in the same sort of neutral colour. Maybe my mother would like it? Must remember to ask...and of course, got to knit it first. 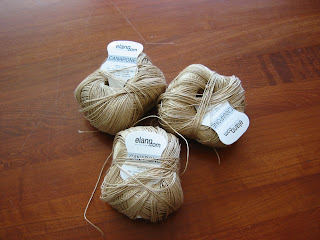 4. Ive been sitting on this bag of Como for a year - I think it needs to become a sleeveless jacket. I want a long knitted cardigan/coat, but probably not in bright orange. Looking for a pattern for this. 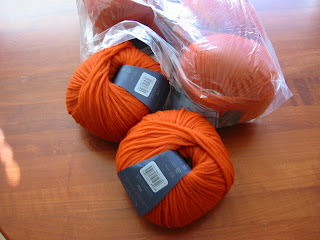 5. I want to knit some Fetching mittens and I have a ball of Cashmerino aran. If the pattern is nice to knit I can see me knitting more than one pair.
6. Christina and I are planning a knitalong for the IK Swallowtail shawl, and I already have the Misti alpaca that the pattern calls for. No reason not to do this - apart from I'm already overloaded with shawls, however pretty. Maybe this would be a nice thing to knit for Eileen?
7. I just bought some Elsebeth Lavold silky wool to knit the cabled cardigan in Vogue Knitting this month. Its the only pattern in the entire magazine that I like, but it calls for a 100% cashmere yarn...I like silky wool so I'm hoping it will be a good substitute. Little cardigans are actually knitwear that I will wear a lot.
8. Got 800 yards of this linen/cotton mix, probably be a summer top for me. 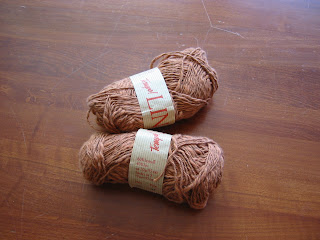 9. Got to knit something out of the stuff I dyed - maybe mittens - but again, if I dont do it soon will not be needing mittens for a while.
10. I bought a nice pattern for a lacy scarf - Ive got some nice yarn that would work for it - but cant decide which.
11. Been sitting on this Artyarns Supermerino for a year (was supposed to be my tank top but I did that in Shepherd Sport in the end. Not sure what to knit it into - Ive about 600 yards so not enough for a sweater. Maybe another clapotis? I wear the Noro one enough. 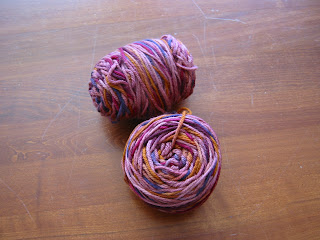 12. Got some Malabrigo to knit into a hat for me, again, if I dont do it soon, wont be worth it until next fall.

So, I have enough plans to keep me knitting for the forseeeable future. Several of these plans are small-scale though so should be able to get through quite a few. Stitches West is coming soon and although I dont have huge shopping plans I'm hoping to pick up some more STR. I didn't buy much last year but it was nice to see what was available and get some inspiration, although it does not look as if I need any more ideas of what to knit...just some actual knitting.

Immediate next thing on the needles is going to be a camera case for Adam, and that has not even made it onto the list!
Posted by Alison at 6:28 PM