Riding along on the crest of a wave

Well, not actually riding - more at anchor in San Francisco. This week the US Navy were in town for the annual Fleet Week. The boys and I went up on Monday as they had a day off school. 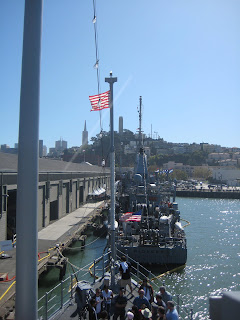 We did a tour of the USS Chief that was at Pier 37. The Chief is a minesweeper - and we learned loads about detecting, avoiding, and disarming mines. (The sailors told us that their favourite method is to shoot the mines out of the water!) We were shown around by Chief Petty Office Nissen who was both informative and entertaining. The boys were fascinated - especially when they had a go at 'firing' a browning machine gun. We pretended to shoot cars off the Golden Gate bridge! 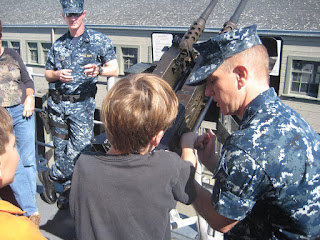 I had a go too - and I could not even prime the gun (here Adam is being helped - I had to be helped too!). We had a great little adventure. We have not done this before and the boys made me promise that next year we could come back and tour a Destroyer. 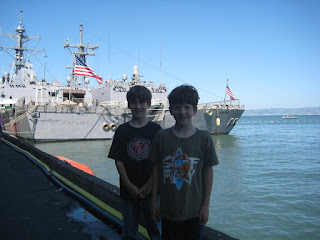