A couple of weeks ago we visited Lambtown again. We last went 2 years ago to this sheep festival in Dixon, California. Now the event runs in October rather then August there is more incentive to head up there as it's not so stiflingly hot in October - although it was plenty warm enough. The show includes a variety of entertainment and wildlife. 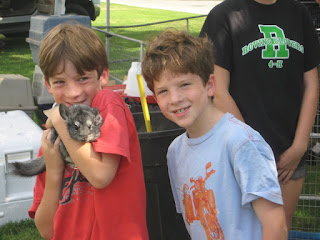 Adam had fun snuggling with this Chincilla - he wanted one as a pet until we pointed out that Charlotte would think he had bought her a substantial snack!

This year Lambtown was combined with Calpaca - the California Alpaca show - and there were also alpacas to pet as well as sheep. We watched some of the alpaca show judging which was interesting. Some alpacas are more friendly than others (you really don't want an alpaca to spit on you!). 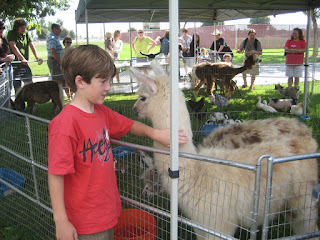 There were a number of other stands there - young farmers, 4H - here are the boys doing needle felting with the 4H. 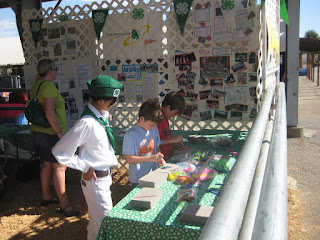 Finally - we got to some sheep - here is some shearing. This chap is shearing the bottoms of the sheep before the shearing contest. This part is not something you do quickly. They also do this before lambing. 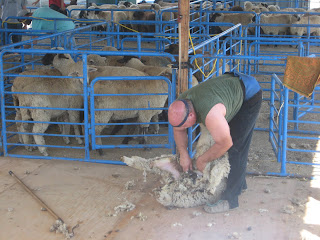 Again, we had a good day out at Lambtown; at lamb, saw sheep. Sadly no sheepdog trials this year (which was a highlight before), and the whole show seemed much smaller and less well attended than last time we went. Hopefully it will grow again next year.
Posted by Alison at 4:44 PM