I have acquired a loom. Its a 16" Kromski Fiddle rigid heddle loom. My intention is to weave some of my handspun yarn. I am glad I chose the 16" - the weaving area is 15.5", but the loom itself is just over 20" wide. I would not have had space for a wider loom.

It came with a 10 dent heddle and so for practice I decided to start weaving with some sock yarn. I used a left-over partial ball of Wildfoote sock in black to warp. 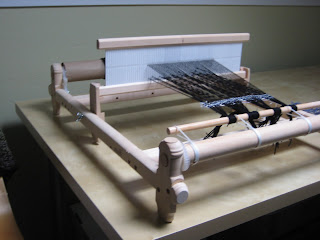 I had read a book on weaving with a Rigid Heddle loom and was quite daunted by the explanation of warping with a warping board. The Fiddle is drilled for use as a warping board but I didn't have any suitable dowels to use as pegs so I did some searching on the Internet and discovered the concept of Direct Warping.

Since I'm unlikely to need to weave anything longer than 6-7' I think direct warping will fit my needs. I set up the warp from one end of my desk to the other - which created about a 6' warp. 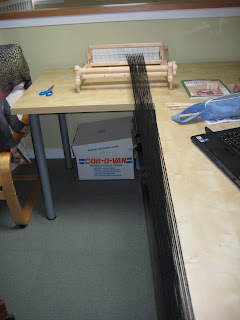 The warping process took me about an hour or so and then I was off with the weaving! I used Noro Kureyon Sock as the weft yarn - cutting out the most lurid pink colour once I decided that I would weave this for a friend who was hospitalized last week.

I was impressed by how easy it was to get started - I completed the weaving in a week - photo of finished item to come.
Posted by Alison at 10:20 PM