I finished my first woven item. This is a scarf for Lamar. I discovered that this sort of plain weaving is called "Tabby". 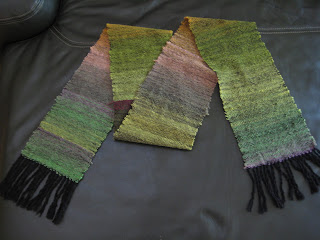 I used wildfoote sock yarn in black for the warp and Noro Kureyon sock in colour S95 for the weft. The warp and weft were pretty well balanced so the black colour is still quite visible. I warped about 7.5" wide before I ran out of yarn, the warp length is about 7' - the finished scarf about 5' after wastage. My weaving pulled the width in to about 7". I used about 75% of the Kureyon sock. 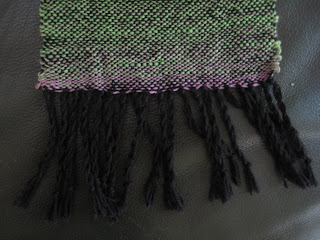 I did cut out the most lurid pink colours from the yarn because it's intended recipient is male. I also did a twisted fringe for a more masculine look.

I learned a lot about weaving with this project - the first thing is that it never occurred to me that as I wound the shuttle I would be reversing the colour transitions. In this scarf it's OK to have a more stripey look - but I had imagined preserving the Noro transitions in which case I would have to wind off sections of the yarn before winding onto the shuttle.

I also improved my weaving technique as the project progressed. I have Davenports "Hands On Rigid Heddle Weaving" book which has some useful tips which I tried to follow. The main area that could do with improvement is my selvedges which are not too neat - but, as I discovered, it's harder than it looks to keep the edges even!
Posted by Alison at 7:20 PM