I did a lot of spinning over the weekend with much attention from Fin. He kept asking to "have a go" but as I was in the middle of a project I could not really let him and fobbed him off with "when I've finished spinning this yarn".

On his arrival home from school he immediately cornered me, demanded the status of my spinning project, and insisted it was his turn to use the wheel.

We sat down with some fiber and I started to teach him the rudiments of spinning. After a few minutes he announced "it is harder than it looks"! (As I discovered on my first attempt at spinning with Christina).

He did persist and wanted me to wind his yarn off on the niddy-noddy (he liked that name) and make him a little skein. 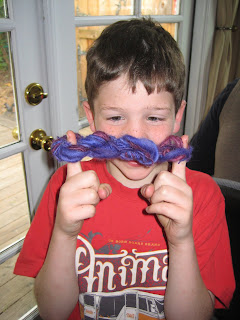 Now he wants me to teach him to knit!
Posted by Alison at 7:29 PM