Along with the progress on the house, there has also been progress on the Weasley sweaters. This is Adam's Ron sweater, also knitted in Webs Williamstown yarn in the Merlot colour. 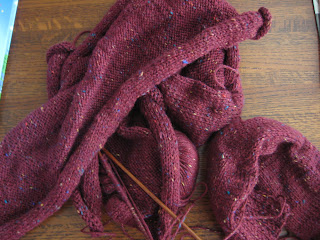 I've nearly finished the knitting on both sweaters, but need to embroider the initials and sew the sweaters up. Both boys opted to have character initials rather than their own. I need to get a wiggle on with the finishing as the scout halloween party is on the 20th so I don't have too long!
Posted by Alison at 9:16 AM