Parade from a different perspective

On Saturday we went to the LG Christmas Parade. We have been coming for many years to see the floats, marching bands, baton twirlers etc. Finlay's first outing to the parade was 6 years ago, when he was aged 4 days. This year, however, we achieved Adam's ambition to actually be in the parade.
The cubs are well represented with different packs having their own 'themes'. Pack 502 participate on home made and decorated go-karts. 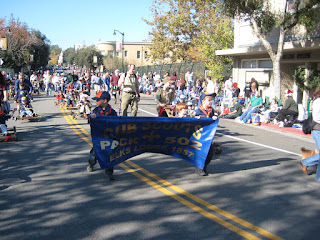 The plan had been for Nigel and Adam to go with the scouts, and for me to take Finlay to watch the parade. However Finlay immediately negociated with the scout leader to join in with the cubs and so I saw none of the rest of the parade but the boys had a great time. They particularly loved their friends in the crowd calling out - and waving to other friends who were also in the parade. 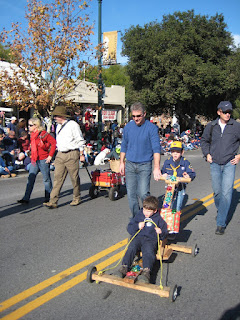 They swapped about on the karts, but ended up with both our boys on the kart. The parade route was pretty long, and we were a long way back in the running order. By the time we got to Main St Nigel was pushing them both. We revived ourselves with brunch at the California Cafe. The boys were unanimous that this was the "best parade ever".