Well, Don't know what happened there - but I seem to have taken a blogging break. The end of term and associated parties, followed by our ski trip, and then Christmas have taken priority of course. So, to try to catch up:
The end of term co-incided with Adam's birthday. He turned eight and celebrated with his class. They were having a pajama and breakfast party in the class so they combined that with thier traditional birthday celebrations. 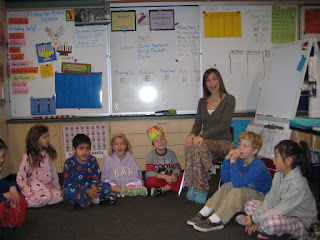 After they sang Happy Birthday, Adam read to the class from his favourite book (Horrid Henry), wore the birthday crown, and could cut in line all day. 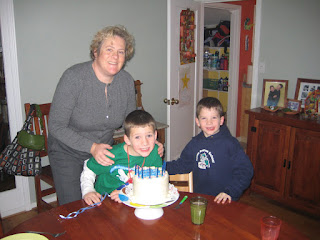 When he came home we ate the birthday cake (banana cake) and Adam chose his favourite dinner (burgers).
Posted by Alison at 3:29 PM