I mentioned that it was cold in New York and how pleased we were with handknits - here is my evidence: 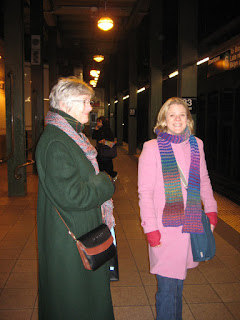 Mammie and Gill both wearing their scarves. Mammie's is the Monterey bay scarf from IK. Knitted in a merino/tencel mix from Ellen's Half Pint Farm. I bought the yarn at Stitches last year with my mother so it seemed suitable. Gill is of course wearing another Noro striped scarf. She is also modeling her dragon scale mitts.

As part of our tour through the garment district we visited Habu Textiles. I had printed off a map with the address and we set of in search of the showroom. We were surprised to discover that rather than a street-level showroom, Habu occupies an 8th floor office and was only identifiable after we had walked past serveral times and studied the tennants board.

However, once we entered I was in my element: 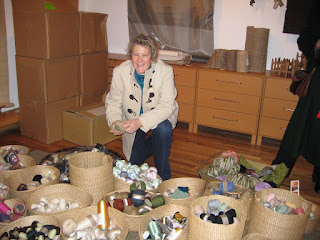 I was very restrained - largely limited by the prospect of carrying yarn around all day - but I did buy a few bits and pieces and Gill chose some yarn for a scarf for herself.

We also swung by Purl Soho - but I was disappointed to see that the shop was just tiny. It was certainly stuffed full of beautiful colours and yarn - but also with other people so not conducive to prowling around. I have to say I think Mammie and Gill were relieved - Habu was enough wool for one day!

I also have to confess that my beautiful knitted beret did not withstand rain very well... the weight of the beret when wet stretched it out until it looked like I was wearing some giant comedy hat! Still - it gave G & M something to laugh about!