Our visitors have gone and our life has reverted to it's usual slow pace. M&F may feel that their visit was also at a slow pace - but these things are relative right?

The boys continue to be thrilled with their garden, shown below are green beans and pumpkins. They have been good at remembering to water them. Adam has also been good at performing his 'chore' which is taking kitchen scraps to the compost bin...another M&F legacy. Since he did composting at school he is delighted to be doing it here and he cant wait for the worms to move in. At that point I will be even more pleased that Adam is in charge of the compost. 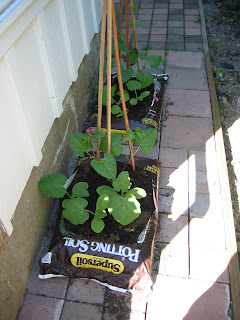 Finlay has also been productive. This is the bee trap. In fact it is a trap to catch wasps, but allow bees to thrive. The idea (as you can probably see) is that the wasps slide down the stick and bang their heads on the stones at the bottom. It really needs some water added as it seems to have evaporated. The water is then to drown the wasps - but the bees can escape in the pistachio shell boats. Simple but genius. 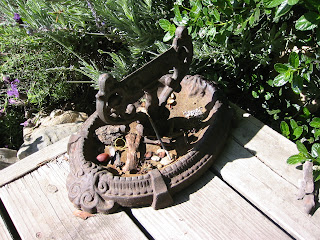 The only downside of this inventive trap is that so far, not a single wasp has actually been trapped. I'm sure its just a matter of time (so is Finlay who checks it daily for wasps)

The wasp trap is a fantastic idea.
I have just explained it to George, and I feel he will be making one, based on this model, as soon as possible before the wasps really become a problem here.
[Will Finlay be patenting it?]