I mentioned previously that I bought a drop spindle at Stitches West. 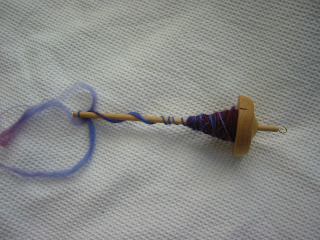 Its a Shacht spindle which can be used as either a top whorl or bottom whorl. Im using it as a bottom whorl at the moment. I also bought some pretty roving to practise with.

My spinning is pretty poor, but its fun, and quite relaxing to do. I cant see that I will ever spin anything that is actually usable but I have already got my full money's worth from this spindle! ($16).

Adam's class are studying Fabric at the moment. Last Friday I went into school to show them knitting and spinning. The knitting part was less interesting as the children could not really try it at all, but they all had a go at the spinning. Its a pity I dont have any photos of this event - but I had great fun - and while I am a pretty bad spinner, I am better than a class of 6-year olds.

The best part was that in the classroom they have a display including a home-made spindle with some unprepared fleece attached to it, to try to minimize the queue around me spinning Adam's teacher asked Mammie to help. Although she had never picked up a spindle before, she gamely used the classroom spindle with some of the children! So between us we had 20 children spinning yarn on Friday morning.

One of the mothers was talking to me about it later and relayed that her son had come home from school telling her that they had made string with a thing that twirled around...she was completely mystified. It was great fun to go into the classroom and be able to do something that was apparently so interesting to the class.