*"Congratulations and be prosperous".

This last weekend Nigel and I took advantage of my parents as babysitters, and went up to San Francisco for a couple of days. We stayed at the Hotel Adagio near Union Square.

We had a great time. The weather was terrific, so we were able to walk all over town, as well as eat our lunch on the harbour-side. We visited the Ferry Building for the first time which is delightful, we ate fresh crab in the sunshine. The building is fairly recently restored and is now a foodie-winey paradise! 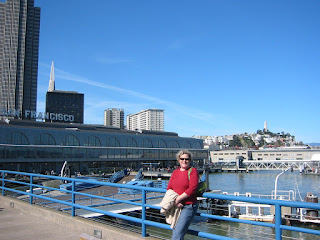 We also managed to get to see Beach blanket babylon which was a riot. I saw this show about 20 years ago, and didnt get many of the jokes, which are topical, and often local. After 10 years living in the Bay Area I found I was able to laugh at many of the comic references, and also at the unabashed silliness...what's not to like in a show that climaxes with the wedding of Madonna and Elvis!

Our weekend was planned to celebrate my 10th anniversary of moving to California (March 1st 1997) but also co-incided with the Chinese New Year parade. Along with 500,000 other people we lined up along the parade route. 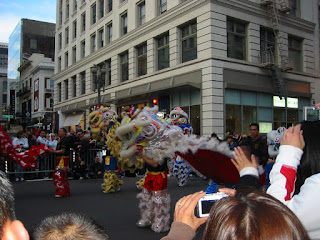 The parade actually lasts several hours, but we didnt stay for the entire time, but we were there long enough to see the SFPD Lion Dance team!

We also made time to visit the wonderful ArtFibers store. They sell only their own yarns, but what lovely yarns in such beautiful colours. Because all the yarns are unique to their store, the provide a swatch for every yarn in every colour, and also balls of yarn for your own testing. I came away with a single skein of recycled sari silk, but with a silent promise to myself to return once I've knitted up some of the Stitches wools.