It's that time of year again: time for the Cub Scout Pinewood Derby.

The boys built their cars mostly over the Christmas vacation - they spent a lot of time refining the designs and cutting and sanding the blocks. They are both old enough now to wield the power tools (with some supervision) and did pretty well. 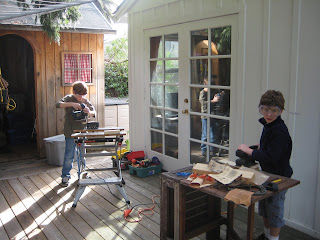 Adam wanted to go for speed and chose a real car to copy. This is his Porche 911. 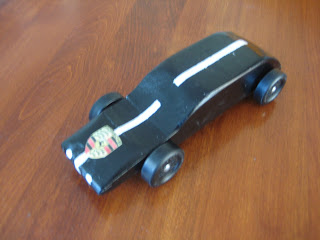 Fin stuck to the more novelty category and made his car into a TechDeck. (for those without small boys techdecs are miniature skateboard toys). 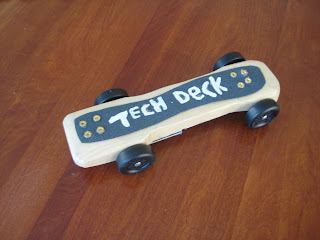 Despite very careful engineering, and much weighing and adjusting neither car was very fast on the actual race day. Adam was rather disappointed as he had high hopes for his Porche - but we did have so much fun building and decorating them that it was hard for me to share this disappointment. He has one more year of cub scouts to try for a faster car!
Posted by Alison at 4:00 PM