January means the annual scout Pinewood Derby. This is a race of cars that the boys have made themselves. The competition is state-wide (for all I know it's national) and to ensure that the playing field is somewhat level the cars need to be made from the same kits. These kits consist of a block of wood (pine I assume) 4 wheels and nail axles.

The race is a short sprint run in heats on a standard track. Here is the track set up to go before the first races: 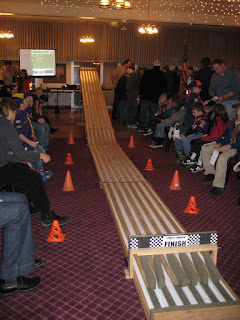 Notice how all the scouts are sitting neatly behind the cones? That lasted until the first race started and then became a scrum around the finish line!

The cubs get a month or so to make their cars and we started over the Christmas holidays. There are prizes for speed, style, craftsmanship and originality - Adam and Fin decided to go for style over speed and both had clear ideas of what their cars should look like.

Adam decided on a snowboard theme. He cut his block in half lengthwise and shaped and sanded it. He painted it and used stencils to make the decorations (there are more decorations on the bottom...just like a real snowboard). He drilled holes to mount the Action Man boots and then added lead fishing weights in the boots to bring it up to the maximum allowed (about 5 oz). 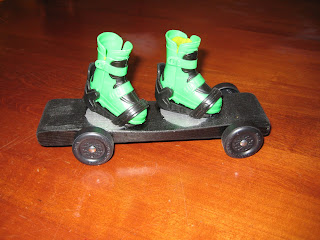 Finlay decided to reproduce the space shuttle. He did minimal shaping of the wood and added styrofoam fins. The fins have to point upwards to meet the width limits. He sprayed the whole thing with silver paint and added a lego pilot. Less weight was added as he took little of the wood block off. He added his decoration with a sharpie. 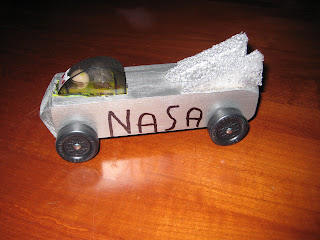 Both the cars did poorly as far as speed - but attracted a lot of attention for the design (Adam's was particularly popular with his peers). They both won awards for their design and craftsmanship (the awards tend to go to the cars that are obviously the work of the cubs - I'm glad to say). Adam's award was one of the usual awards for "Best use of accessories" and Fin got a special award for "Space Stabilizer Design".... 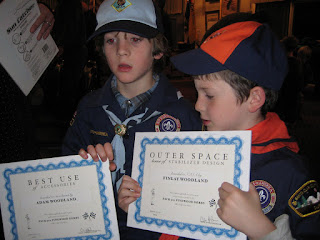 They were both delighted and already planning their cars for 2011!
Posted by Alison at 7:02 PM

Fabulous cars! I remember my brother's Pinewood Derby cars. They didn't have style points then.

I especially like Finlay's space shuttle. Good job! Hey, let me know if the boys' school or scouts wants someone to talk about satellites.

Future engineers?
They did a great job on their cars!