Off the needles: Indigo Ripples

I don't think this skirt made it to an 'on the needles' post - but here it is...already finished. 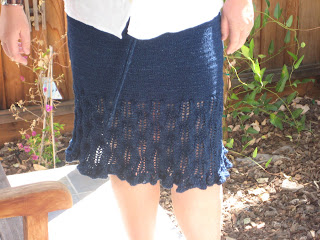 The pattern is Cat Coyle's 'Indigo Ripples' from Interweave Knits Spring 2007 issue. I knitted it in Elann Den-M-Nit cotton. The Elann yarn is similar to Rowan Denim that I have previously knitted two sweaters from. I really disliked the Rowan for it's colour bleeding and it was harsh to knit. I preferred the Elann yarn, it seemed softer, and although there was some colour bleeding onto my hands when knitting it was much less.

I got gauge with 3mm needles which seemed impossibly tiny to knit a skirt, but actually it was rather a quick knit - maybe 4 weeks or so. I tried to knit true to size, with the intention of wearing the skirt at my natural waist - but in fact it sits better on my hips and is a better length worn on the hips. The yarn is intended to shrink when washed and it actually shrank not only in length but also in width slightly. Before washing the skirt was 25" and after washing and going through the dryer it was 21". This has made the knitted fabric nice and dense and I wore the skirt today without a great deal of bagging at the seat.

I did end up modifying the ruffle like Amy did to line up the feather and fan on the ruffle, but other than that knitted the skirt according to the pattern.
Posted by Alison at 5:14 PM

That is a great skirt. Very tempted! Yours looks fab on.

Looks great - Should be fun to wear.
billie

Wow, I've always thought of knitted skirts as a garment only for toothpick slim models, not something I would ever consider to knit for myself, but you have changed my mind. It looks great on you! and I want one!

Very cute! I just finished a knit skirt, too. I love the drape.