I saw recently on the BBC that apparently Paddington prefers Marmite .

Although I like Marmite as much as the next man (which is Nigel, who likes it quite a lot), I still like a bit of marmalade on my toast. Marmalade seems quite expensive here, and since our neighbour has an orange tree, it makes most sense to make it myself. 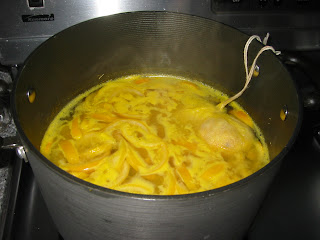 The oranges are quite sour and really inedible raw, but they make great marmalade. 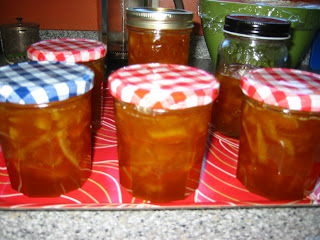 The first time around I made it rather runny, but after a second boiling up it seems a nice consistency, and tastes just like the real thing....but more orange-y. I usually pay a 1-jar tariff to my neighbour for the oranges - no idea what he does with the marmalade...maybe he even eats it?

The supermarkets are selling off over-ripe strawberries here so I could not resist buying some for jam. Strawberry is my favourite - with George it's plum, but we have lots of that from our trees in France: plum and greengage. I have made so much plum that I thought I would give strawberry a miss this year but glad to say I managed 3 pots; have not checked consistency yet but they seem quite stiff.
Can't wait to try the marmalade for breakfast though - not long now!