Deck the halls with...

Well, actually we don't have any boughs of holly, but we do have this: 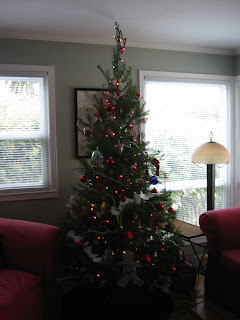 If you look closely you can see the angel and snowman chains that they boys made - heavily decorated with glitter glue. Somehow glitter glue just does not have the same appeal as those phials of glitter that we used to have - but probably a lot less messy (and the glitter glue was messy enough for me to begin with).

On Saturday Adam and I went with Emma to see The Nutcracker at the Santa Cruz Civic Auditorium. 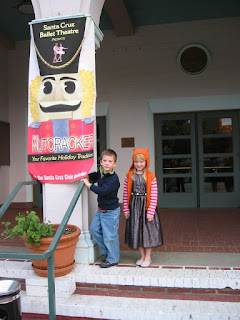 This was Adam's first experience of ballet which he summed up after the first 10 minutes... "but it's all just dancing".

Having said that he was still and quiet for all of the 2-hour performance. It was a semi-amateur performance, with only the principals being professional. The part of Clara was danced by the daughter of a friend of Julie's so we got to go backstage and meet her afterwards. The standard of the production was high and they had a full orchestra so I really enjoyed the whole performance.

Afterwards we went to Marinelli's in Santa Cruz and had hot chocolate with 'smudge' (fudge) on the side - heavenly - but so filling I could not eat dinner!

Your tree - lovely - my tree naked - more of that in a future blog - if it weren't for year end frenzy I'd be blogging now.
Spent entire weekend cleaning which was not as bad as it sounds...

Adam was really good to watch the nutcracker with full attention - since it was "just dancing" it must have really interested him. I found children are always rivetted by live performances, (especially the stage lights going on and off!) but Adam may be a bit too old for merely that kind of thing to be enough.