I finished my long socks. These were my first attempt at 2 at once toe-up socks and it was with mixed success. I used Kristen's pattern, which worked really well, but the short-row heels just dont have the same fit as a heel flap. While I did like getting both finished together, and the convenience that I was making up the pattern as I went along, without having to take notes, I didnt much like knitting the pair simultaneously as my wool kept getting tangled. 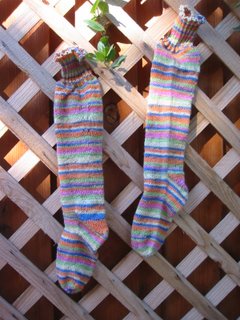 So, here they are - knee socks. Knit in Lanna Grossa. I made several mistakes in my pattern - that is my extending them to be knee socks. I basically didnt increase enough stitches quickly enough for my calves. They fit OK - but the stitches are a little distorted, especially on the rib. Next pair I'm going back to my usual top-down pattern on dpns.

By the way - the artistic shot of the socks is deliberate - knee socks are not flattering on any but the most skinny-legged of us! 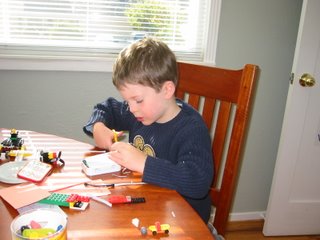 This photo of Finlay was taken on Friday when he decided to make some animal cards. He went to Adam's school and some of the boys had cards with animal photos and facts on them. Finlay had me write the animal names on the cards and then he drew the animals (lion, leopard, tiger, cat) to make his own cards. He then cut them to fit a mint tin so he could carry them around. Remind you of anyone? ("I could make that...")