Progress has been made on the orange sweater. Its Rowan Chamomile from the Summer Tweed book. The summer tweed is a blend of 70% silk 30% cotton and was a gift from Christina for my birthday. It knits up thicker than I expected - but that means its quick. It's for me, but its probably going to be too heavy to wear for a few months as its now hot here. 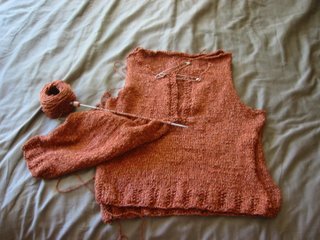 This is the new purchase. Its Koigu premium merino and is intended for socks. The photo does not really do justice to the colour as its much more muted shade than shown here. Im planning to try the embossed leaves socks from IK Winter 2005 but will see if my knitting skills are up to it. 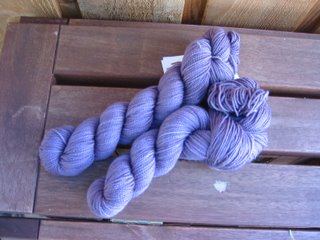 Finlay came with me to Knitting Arts as he was on a mission of his own. He spent all morning talking about needing to get his spaceship from Sunnyvale where it was apparently parked in a car park. I persuaded him that Saratoga was a good substitute and he happily came with me on the promise that we would go and search the car park.

We didnt find the spaceship (apparently orange and green, but containing a chemical that made it look like a car) but we did find the patch of oil from where it had blasted off, and heard it (although that may have been a Harley in the street). However, F was happy with this resolution and went home pleased with his discovery.

I was amazed that he maintained this fantasy basically all day without any input from anyone else except substituting Saratoga for Sunnyvale. We were getting afraid that we were going to have to actually go to Sunnyvale to stop him worrying about the spaceship!

I expect Fin's space ship really is in Sunnyvale - and now it will be towed.... and when he comes of age he'll have to find it so he can get back to his home world (you know he comes from another planet...?).

The sock wool looks great. Shame you are not so keen on hand knitted socks - I was planning Nylox socks for all this Christmas in varying shades of fawn.

PS
The silk tweed sweater looks lovely. The colour is particularly appealing in that type of wool. I have not finished mine yet - interrupted by project for Diane - but the turquoise colour does not have the rich colour depth of the orange.
Looking forward to seeing you modelling it - maybe in the depths of winter.

Finlay obviously is also afraid that his spaceship will be towed because at dinner last night he, again, reminded us that we needed to go to Sunnyvale. Im beginning to be convinced that he actually does have a spaceship parked somewhere in the bay area.