Fin and I went to the Library launch event on Sunday. This is to kick-off a fundraiser for new furniture and fixtures for the town's new library that will open in 2012. The theme for the event was Lauches and space so they invited Edward Lu to speak which was our main motivation for attending the event. He talked about his 3 space missions, in particular the last one which was a 6-month stay at the International Space Station with a Russian cosmonaut after travelling in a soyuz rocket.

He was an excellent speaker - entertaining to both the adults and many children in attendance. At the end of his speech he invited questions from the audience and Fin was the first one in line. 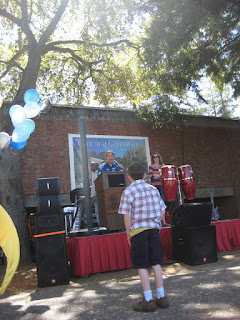 His question was "Does travelling in a rocket make you feel sick?". The answer was that it does not, but coming back to earth after 6 months of weightlessness does!

There were also some other space-related activities; here is Fin launching his stomp rocket. 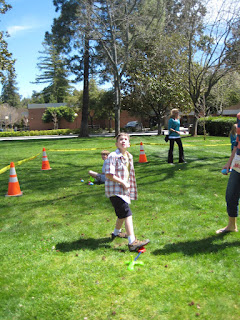 Edited to link to the Weekly Times in which Fin has a quote: http://mytown.mercurynews.com/pdfs/losgatos.pdf Page 6.
Posted by Alison at 3:06 PM