Nigel trimmed the trees in the garden a few weeks ago. Rather predicably Fin was scavenging all the usable sticks and built this Tipi. He was very keen to point out that it's structured "in the old way" with the sticks tied together with vines. He wanted some bark or leather to cover it but had to make do with some fake suede I happened to have. 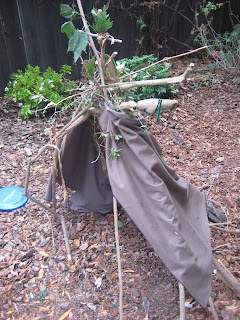 We both described it as a wig wam - but Fin correctly pointed out that it is, in fact, a Tipi. The cat really likes it and is often to be found lurking in it's shelter - but we only managed to get a blurry photo of her in it. Fin himself, just fits underneath.
Posted by Alison at 10:51 AM